Morning, all.  I'll replace this with  a proper post once I've uploaded yesterday's photos - which won't be until I'm home again.

Morning again!  I'm home, first load of washing in the machine, a nice coffee to hand, having just uploaded yesterday's photos after the best and easiest journey home there ever was.  Hardly any traffic until I got to Braintree and even then it was all small traffic, not heavy lorries, etc.

Yesterday was Ickworth day - well, half day really.  It was literally a ten minute drive out on the one road to get there - so easy even I would have had problems getting lost!  As I was there nice and early, it wasn't too crowded although by the time I left early afternoon, it was pretty full and busy.

As the house didn't open until eleven, I had plenty of time to wander around and to think about the last time I was there with Mum, Dad and Jacqui, their lovely next door neighbour.  All three are now no longer with us and I shed a few tears in remembrance. 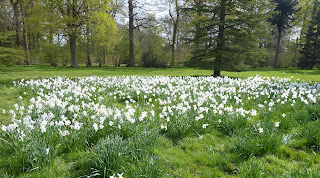 All round the back, there were bulbs, mostly6 daffs and the like, and you could see that three weeks ago they would have been absolutely stunning.  As it was, they were still rather lovely, with patches of later flowering narcissi that just shone.  The photos do not do them justice. 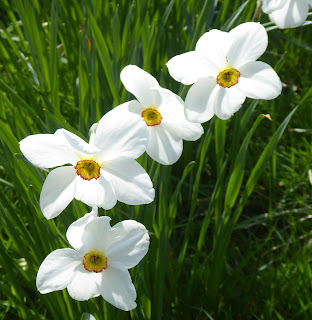 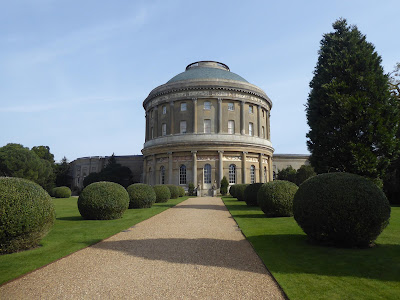 The famous rotunda from the bottom of the Italianate Garden.  I went inside, of course, and enjoyed a good look at the works of art and the silver collection (glad I didn't have the job of keeping that lot polished!) plus a couple of rooms set out as they would have been. 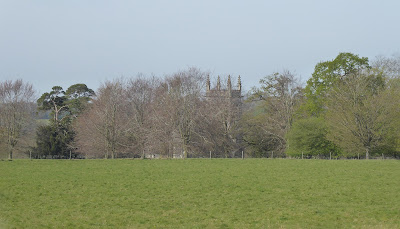 I strolled around the grounds a bit (not far) and looked inside the church which is no longer an active place of worship.  Here's some info about it as I didn't take any photos.
https://www.ickworthchurch.org.uk/

Thankfully, my ankle decided to play ball and, apart from a slight ache, gave no trouble.  Today it is fine.

So - I'm home, feeling more than a bit weary but very happy at having had a really pleasant time away.  The staff at the Premier Inn were lovely (although few in number), extremely friendly and attentive.  I will be giving them a special mention when I get the feedback form.  They made my stay extremely pleasant.

So now I have some unpacking to finish off, plenty of washing to do and I ought to pop round the corner to Morrisons to stock up on fresh stuff again which means making a shopping list.  So I'll stop rambling and get moving.  Back to normal again now for a few weeks.

Have a great day.  xx