Morning, everyone!  It's a bit warmer this morning so there's no frost.  Yesterday remained pretty cold for ages  but was so gloriously sunny and bright, I didn't really mind.  The drives to and back from Dad's home were very pleasant and at last, at long, long last, the Little Hadham by-pass is finished and open.  It does go a long way round the village but is so much better.  The road through the village centre is only wide enough for one car's width so there's four way traffic lights - you can imagine the rush hour tailback on a busy road like the A120.  I bet the residents are delighted that it's all done.

Well, yesterday was an interesting day and a very useful day.  The estate agent had talked John through various things he felt the house needed to be selling-ready, none of which were particularly difficult to do, mostly involving clearing bits of clutter, etc.  I set to and got everything done apart from John's bedroom and the kitchen, both of which John will deal with before he leaves this morning.  John helped with a bit of heavy lifting and decision making and then I did the rest while he sat down with a stack of keys to identify and label.

We also talked finance as there's now a pretty fair idea of how much is in the estate and how much we should inherit.  Obviously, I'm not going into any details but will just say it lifts any concerns about any reasonable future needs and, wisely invested, should make a good sum to hand on when my turn comes - always assuming I haven't frittered it all away in wildly abandoned living in the meanwhile!
And I won't feel guilty about treating myself to an occasional roast lamb joint which, as we know, costs an arm and a leg at the best of times.

I came home with a few more bits and pieces including a nice tripod for my camera.  I shall use it when doing Eileen's focus homework (probably today).  I've also got a fold down baize covered card table which won't be used for cards, just as a useful extra surface when needed, and a hearing aid/telly gizmo.  I already have one of the latter but another is always handy as they seem to be quite hard to get hold of.  They connect up to the telly, you put the thingy round your neck and it connects with the loop function on my hearing aids so I can hear the telly clearly without needing to have the sound up at all.  Very useful when one lives in a semi detached home and one doesn't want to disturb the neighbours. 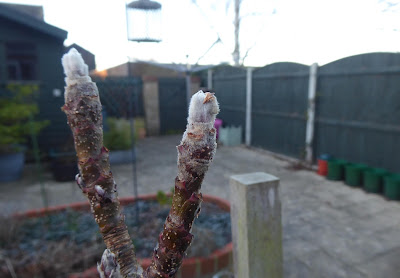 I played with the camera again and this seems to be the best it will do in terms of a fuzzy background.  It's not really a good 'Bokeh' effect which, as any fule kno (cough) is, and I quote Google . . . 'the aesthetic quality of an image's background blur'.
So now we know!
On the other hand, isn't it amazing that from each of those stubby little buds will come spring leaves and blossom and autumn apples.
Today, I feel a bit achey after lots of running up and down stairs yesterday so I will be taking things easy.  There's nothing I absolutely HAVE to do so in terms of housework so I'll take it as it comes.
Hoping you all have a lovely Sunday.  Keep safe and be happy.  xx
Posted by Joy at 08:24