Good morning, everyone.  It's mild and dry (and still dark) outside.  Yesterday was a real mix of weather.  We had blustery winds, sun, heavy showers . . .  it felt a bit cold in the wind, then it felt warm.  Just one of those days.  Today is supposed to be between nine and fifteen degrees and less variable.  We will see.

Yesterday started off with Festive Blast.  It went fine but maybe a tweaked something because through the day my back started ouching a bit and I've not had a very good night's sleep.  I'm mobile, it's just uncomfortable.
I've pulled out of  Festive Blast this morning and also out of my weekly personal training I had scheduled for midday.  I'm going to rest up and that should sort it out.

I did a bit more clearing and sorting out, put some washing on and then forgot so I've just started it off again and must remember to actually get it out.

Last night's telly was good.  I watched recordings of My Fair Lady (always enjoyable although I'd like to smack Professor Higgins around his smug chops, especially at the end!!) and then the documentary about West Side Story which really is my most favourite musical ever.  I then started watching the film version but didn't get more than about half way before I decided bed was in order.  I did got to sleep but woke up after a couple of hours with that twingy back.  Most annoying!

The twelve nights gift was three mini bottles of clementine gin which I HAD to deal with as I am going 'dry' on January 1st for at least a month. 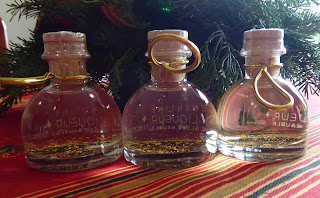 Today, I'm taking it gently but should get stiff done.  The washing, for a start!  I need to just have a little sort out in my bedroom too as it's a bit on the messy side.  Downstairs is fine as I've kept on top of it for once.

I've taken the Kellybronze turkey out of the freezer to start thawing in the fridge.  I ordered an extra small one which is supposed to be around 2k in weight.  Before Christmas I got an email from them that said this:

"You will have heard about the Avian Influenza outbreaks throughout the country. Whilst our KellyBronze turkeys were not affected by the two outbreaks in Essex, they were in the surveillance zone the government puts around any outbreaks.
This meant we had to pluck some turkeys a week later than scheduled, which means they have grown a bit bigger than planned.

Please check the weight of the turkey you receive (it`s on the label on end of turkey box), as it may be a bit bigger than you ordered and therefore may need a few extra minutes cooking time."

I didn't look at the box at the time although I realised it was bigger than it should have looked but I wasn't fussed because they don't charge more if the turkey is bigger.
I did weigh it this morning before it went in the fridge though.
'A bit bigger'?
'A few extra minutes.'???

My supposedly 'around 2k' turkey weighs a bit under 5k!?!

It's just as well I like turkey, I have room in the freezer, my daughter has cats who view a few chunks of turkey as the best treat in the whole wide world and a son who will be happy to take plenty home with him.
But more than double weight!!!  I got a bargain there, right enough!

And I am VERY glad it's getting 48 plus hours to thaw.

Well, that's enough for now - have a lovely day, everyone, and enjoy whatever you have planned.  Stay safe and be happy.  xx