Good morning, everyone.  The penultimate day of 2021 and it's been quite a year, one way and another, hasn't it?  Weather wise, it looks as if it will be going out with a whimper - very mild and damp - rather than any meteorological bang.  The same as today, in fact,  And yesterday, when it was pretty dull, damp and warm all day.

The back feels much better today, thanks.  I not only slept on and off through the day, I also slept well all night, going to be early and waking early too. 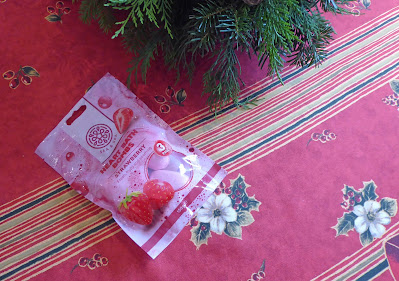 This was yesterday's Twelve Nights gift - some strawberry bath bombs.,  I's already had my bath before I opened it so will treat myself to one this morning and hope I don't go around smelling too much like a fruit salad!
As my back felt quite a bit better later on, I did get out a bit yesterday.
I saw, on the Lathcoat's Facebook page that they were now selling Spice Queen mixes.  Spice Queen is a local company that sells really good, mostly Indian, spice mixes, sold on their stall in the market and also online.  I don't think the stall has been up during the pandemic although, to be fair, I don't go into town enough to know really.
They sell online but you have to pay postage so I was glad to see that Lathcoat stocks them.
What particularly caught my eye was that their 'Festive Left Over Turkey Curry Mix was available.  They only have it around Christmas and New Year and I've used it before - it makes a gorgeous curry and, as I am likely to have plenty of left over turkey, I drove straight over to get some.
While I was there, I got some other spice mixes and a few other bits and bobs such as some eggs and some of their own Cox's apples, not that I actually needed the latter but they looked so lovely.
I brought in the turkey (very carefully) and it is now thawing slowly and safely.
Eileen, the programme about West Side Story was called 'West Side Stories - the making of a classic'.  It was on BBC 2 and here's the link to iPlayer.
https://www.bbc.co.uk/iplayer/episode/b086kfbb/west-side-stories-the-making-of-a-classic
It was not at all the same as the classic Bernstein/te Kanawa/Carreras programme but I found it very interesting and there's some fine singing and dancing.
The latter is on YouTube although, probably, the quality isn't great.
https://www.youtube.com/watch?v=j3SEW63LsaM
Today, I am doing Festive Blast but VERY carefully.  It should be fine as long as I take it easy.  I will be spending some time prepping stuff for tomorrow's New Year's Eve meals, writing my timing plan, some housework and the rest of the washing, drying and ironing.
Not particularly exciting, but necessary.  :-)
What is more exciting is that the new Slimming Eats recipe book should be arriving today and I've also got a freebie version for Kindle too.  I had a good trawl through the Pinch of Nom book yesterday and there are simply loads of recipes I'd like to try so, between both those books and the leftover turkey, I will be eating very healthily and also very well through this winter.
Have a great day, take care and be safe.  Thankfully, this current variant seems to be pretty mild but Delta is still out there too and that is not so mild.