Good morning!  Another damp and dismal early morning here - again!.  I thought, as I drove over to Lindsey's yesterday, that there was a slight break in the clouds but, if there was, the Wise Weather Woman mended quickly!
Beeb tells me that it's going to be fairly cold overnight but that's just a blip and Christmas itself looks to be mild, damp and soggy.  Oh, well, it's just as well we weren't planning a trip to the seaside, isn't it?

As usual, yesterday was a good day.  I had a parcel - two books that I had ordered from Amazon over the weekend.
One is a book of comprehension exercises for my student - lucky think!
The other is a book that Eileen mentioned on her blog - A Year With My Camera, Workbook 1.  As you know, I do like snapping away with my little camera and am often a but frustrated with the outcomes, thanking the powers that be that I can delete them with a couple of clicks, not like the Good Old Days when you paid for and took possession of a pack of photos only to find that 95% of them were rubbish!!  Well, I did anyway!
It starts off with the the technical stuff which is the area I am most ignorant about and find hardest to make any sense of whatsoever so I am very much hoping that I don't crash out at the first hurdle because this book wasn't cheap!  When Eileen mentioned it, something inside me just sort of 'resonated' so maybe this is my Grand Project for 2022.  Maybe I will end up, in twelve month's time, a better photographer than I am at present - which isn't saying much, I know.  Fingers crossed!

I forgot to mention The Cake yesterday - it was the first think I did so now it is all nice and decorated and looking pleasingly old fashioned and not the least bit 'stylish' - just what I wanted, in fact.

Here it is, although I had to take the figures back off to put the cover back on.  They're not stuck on, they just sit there, so that's OK.
I couldn't decide whether it looked better with the red background or the green, so you have both! 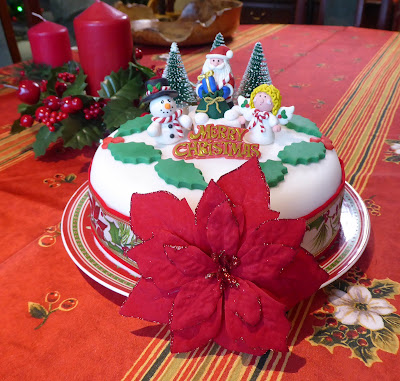 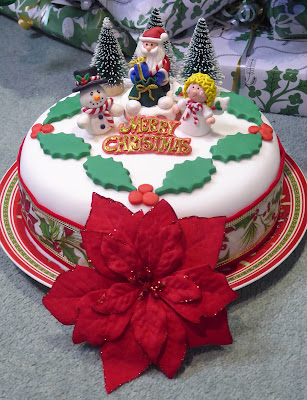 The flower is there really to hide the join of the ribbon - it's a bit too big so I might have another think about it and see if I have anything that would work better.  I'm not going out to look for anything new though!  There's plenty of ribbon left and I did learn how to shame a nice ribbon at the wreath course so nothing ventured, nothing gained.
Perhaps I should have used a smaller cutter for the holly leaves?  Not to worry, it looks great anyway.  It has the child-like vibe I was aiming for.

Circuits was great.  There were three of us there in the end and, being a Good girl, I did my LF test before going.  That's it now until Jen 3rd although there are other Lindsey run things going on.  PT on Wednesday, of course, and next week she is doing a five day 'Festive Blast', nine till nine thirty, online, Monday to Friday and I'm booked into that!  If nothing else, it might get me back on the food track again but, knowing Lindsey, it should be fun anyway!

In the evening, I binge watched a series of three programmes I have seen before, The Sound of Musicals, by Neil Brand.  You can get it on iPlayer.  He goes through the 20th century, from the rise of the musical to the mega-musicals, such as Les Mis and so on.  It's really interesting, loads of songs and some most interesting background info.  I just have the last half of the third episode to finish today.

The lovely Sharon arrives at ten to make sense of my hair and then, some time after eleven, a young friend is arriving to discuss power washing my patio and repairing a few pots, etc.  I'm glad about that!

Apart from that, the December diary says 'Blue room beds' but I've done that.  I will dive into the workbook and get linked up with the support stuff - there are weekly emails, I gather, a Facebook page and so on, and I must locate my camera manual, either the real one or online.
Also, I MUST complete my shopping list for tomorrow.

Should be a nice day - how about you, what are your plans?

The music for day twenty one is that lovely, jolly carol, I Saw Three Ships.  I just enjoy a dancey carol and this certainly dances!
Wiki tells me that the earliest recorded version is from the 1600s and is possibly from Derbyshire.