Good morning, everyone.  Guess what - it's dark, damp and not particularly chilly!  Same as yesterday, pretty much.  I've just been to the shed for the day's supplies and there's just a hint of drizzle in the air, not enough to say it's raining though.

Yesterday was a very satisfying day.
I got the second stollen loaf sliced, wrapped and safely out of grabbing range.  It worked as a loaf but I should have wrapped the dough more tightly around the marzipan because there's a great big 'butter thief' (as my Mum called it) running right down the middle.  Oh well, not to worry, it certainly won't affect the flavour.  You can't see the hole in this shot because it's right at one end - one more slice off and there it was!. 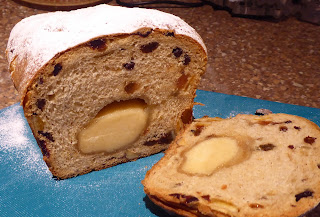 Then I set to with the tea loaf.  It's so easy; you soak the dried fruit in tea overnight, then add sugar, egg and flour plus your spices, mix well and bake in a loaf tin - or, in my case, two smaller loaf tins.  It is also sliced, wrapped and frozen - I like it too much to have it in a tin in the kitchen.

Then I thought that, seeing as I was in the mood and because the kitchen was messy anyway so a bit more wouldn't matter, I made the shortbread.  I turned to faithful Cookidoo (the Thermomix recipe site) and found a simple 1-2-3 recipe - all you do is add the ingredients (I also added some orange zest) and then mix it on speed 5 for 25 seconds; it comes together beautifully.  Half an hour's chilling and it was ready to roll and cut into Christmas shapes.  I always bake shortbread lower and longer than the recipe says.  It did turn slightly brown at the edges but not so as you'd particularly notice.
That's now tucked away in a tin so I will need to be controlled - for a few days, anyway!

Beth came round in the afternoon which was lovely.  She test tasted a mince pie and a shortbread biscuit and pronounced them more than acceptable.  It turns out she and Alex are NOT going to stay over Christmas night but they are both staying over New Year's Eve and Day, so that's nice.  I had bought some 'bake yourself' cinnamon whirls for us to have; I've checked the date on the tin and it will still be fine for New Year's Day

I also got some washing done and dried inside - no chance of anything drying outside - but not ironed so that's on today's list.
I also have circuit training and I will test before I set off, just to be sure and keep the others safe, although one of us has asked to join online anyway.
No tuition for two weeks (and possibly longer if rumours about a 'circuit breaker' are correct), which means that not only do I not need to go out, I also don't need to put the tuition bag in a 'fall over it' place to remind me to go through the plans!

To be honest, this week looks a bit blank, especially as I don't want to go out any more than I have to.  Looking at my plans, today says 'towels in loo and bathroom' which will take all of - oooh - one minute!  Tomorrow it the guest room which I don't need to do now until next week.  Wednesday says 'sharpen knives'  Thursday says 'turkey coming' and 'cook ham'  while Friday says 'anything else?'

I do have a few things to go out for or have someone in.  Today is circuits, tomorrow the lovely Sharon comes to do my hair, Wednesday is early morning shopping although I may do that tomorrow if I wake early, just to get it done, and also my personal training session with Lindsey - whether that is face to face or online depends on what comes out from the government today.
On Friday, Jen is running a drop in weigh for SW but not a full session.  I asked if she wanted me to help out and she said yes - she knows I probably wouldn't go if she said no, I think, and I should go really.
Finally, the cleaners come at some point and I must remember to email Gabriela and find out when - it won't be Friday this week, of course.
And that's about it.  I think a few lateral flow tests through the week would be a Sensible Thing.

Did I say the week looks blank?  Maybe I was wrong!

However, I am in need things to do.  The above won't fill all that much time really.  I have my knitting, my telly, the house, plenty of veg prep pm Friday, some online exercise, etc, and I might see if I have some easy little cross stich kit I can do.  It's going to be a very self indulgent week and I don't want to do anything that will generate a lot of mess! 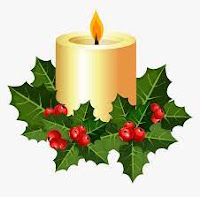 Today's Advent music made me laugh - such a good performance!

Deck the Halls, from the King's Singers.