Good morning, everyone.  It was a flippin' cold day yesterday and it's a flippin' cold start to today as well.  It's December, it is supposed to be cold in December but that doesn't mean we have to like it!  What was nice though was the glorious winter sunshine.  No complaints there.
Have any of you had snow (or more snow) yet?

Yesterday worked out really well after a stupidly early start.
Chris turned up at ten and we had a jolly good chat as always.
Then I did Santa duties and now have a big bag of goodies that can go under tomorrow's Christmas tree temporarily.

Annoyingly, some of the Virgin Media services crashed at some point in the morning so I had to resort to the PC to get my daily YouTube fix.  Netflix is also out of action (or was) and that is not great as it's a paid service.  I gather it was a nationwide problem and some areas lost all TV access, not just a few things.  I haven't checked this morning but fingers crossed they have got it sorted now.

Remember the flowers I showed you last week.  Well, here they are again, still OK.  Mind you, I refreshed the water yesterday and they left a little trail of petals all the way to the kitchen and back again so they are on the way out, for sure, and are starting to look a bit shrivelled.  However - two weeks of loveliness for £5.97 - really not bad! 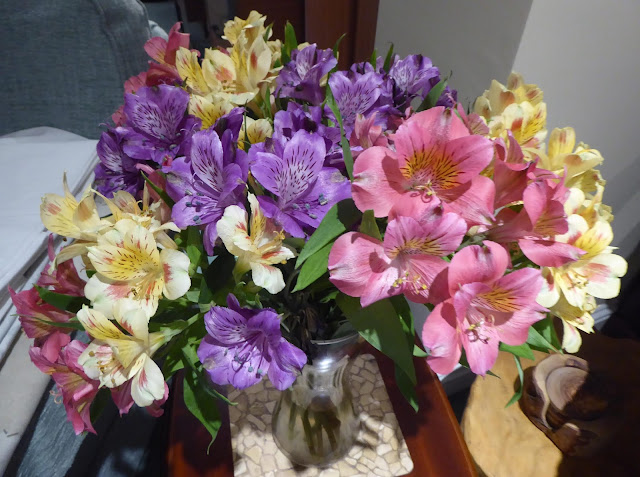 I put together a makeshift for wreath for the front door - I had one of those cheap undecorated rings of artificial branches and just stuck in a few shiny bits.  I am looking forward to a wreath making course in eight days' time but wanted something in the meanwhile.  I forgot to take a photo but it looks OK.   Nothing posh but then, living at the end of a cul de sac, no one ever goes past anyway?

Today, being Friday, starts off with Slimming World, followed by a quick shop in Morrison's for a few things for tomorrow.  Then I'm home again to just tidy a few corners of the house in preparation for the cleaners.
Today's decoration thingy is getting out my lovely wooden Nativity set and putting it up where it usually goes.  I'll try to remember to take a photo but here's one from last year.  It will look pretty much the same this year. 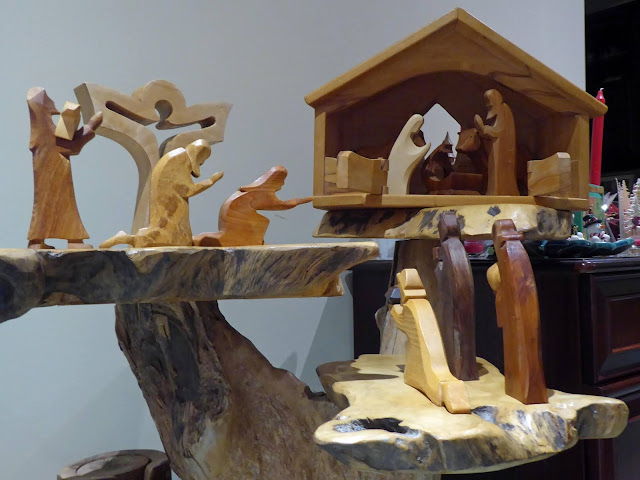 For today's Advent music, I'm still with Handel and The Messiah with another good old favourite, 'And the glory of the Lord'.

I always enjoy following the score and warbling along to the alto part!
I had a great time yesterday evening gathering together some of my favourites on YouTube (using my laptop) and now I have so many I might be giving you two for the price of one from time to time.