Good morning.  Yesterday's red sky foretold accurately.  It was dry (just) when I walked home wreath in hand, but it started drizzling soon after and it has obviously been raining overnight although it is dry and mild at the moment (around six o'clock).  I think today might be a day to snuggle down inside although I've not checked.

Yesterday was lovely!  The wreath making morning was great fun - there were ten of us but only two of us hadn't been to one of these before.  The basic ring had been done for us and there were so many different ornaments/decorations to choose from to wire and fasten to the ring.  Now I know how they make those bows.

It's on the front door now and will stay there until after Christmas. 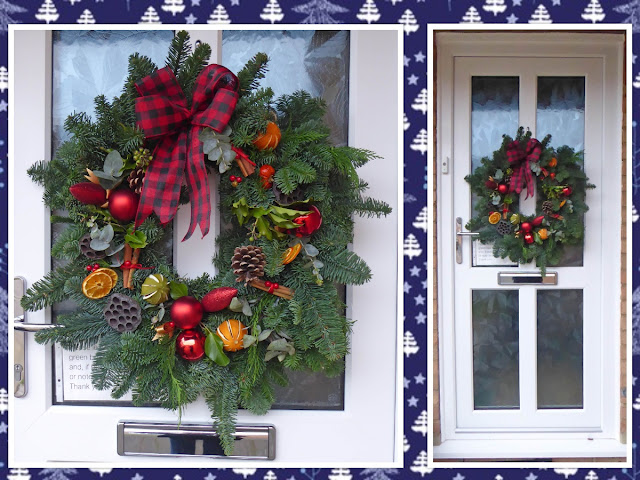 No, it's not brilliant, I can already see where there are 'problems' but it's the first I've ever made so I'm pleased with it and it does look nice on the door.

I did a bit of sorting and tidying but most of the day was pretty lazy really.  The new Pinch of Nom books looks promising after a first flick through and I will read in more depth today.  There are loads and loads of things I want to watch over the Christmas period so there's an awful lot of highlighting in my copy of the Radio Times.

Did you watch Strictly?  However can one choose; they were all so good that they really should all be in the final and, if there hadn't been dropouts, probably would have been.  I've voted but I did feel a bit mean!
I know that the info about who has been eliminated is out there already but I never go looking, I wait for the results programme.
And I am very much looking forward to the final next week.

Today, the Christmas thing is to put out the Christmas door mats.  That means washing the others ready for the New Year.  I think I might also do some mince pie making for the freezer and I do need to read through my biscotti recipe and make a list of ingredients I need to buy (pistachios, for example).
Really, though, it is going to be another lazy day and I will make the most of it as next week is busier, one way and another.

Today's music is 'The Carol of the Bells', composed by Ukrainian Mykola Leontovych.  It is musically interesting, being based on an ostinato.
Wiki says:
The music is based on a four note ostinato and is in 3/4 time signature.  The ringer of the B-flat bell, though, feels it in 6/8 time.  The carol is metrically bi-stable, and a listener can focus on either metre or switch between them.  It has been performed in many gentres:  classica, metal, jazz, country music, rock and pop.

I like music with a bit of a listening puzzle to solve.

There's a lot of choice on YouTube and, if you're interested, it's worth listening to a few versions in different styles.  I was torn between Pentatonix and Libera but went for the latter in the end!