Good morning, everyone.  Yes, finally we had sun yesterday.  It turned out to be a really lovely day, quite warm and very sunny.  Cheers.
I'm up at stupid o'clock having woke well before the lark, so I can't see what the weather is going to be like but the pointers are for a warm and sunny day.  Bring it on, that's what I say.
Edit:  It has turned out to be one of those lovely Autumnally misty starts to the day with a smoky aroma in the air that will burn off when the sun comes out.  I know there's a couple of weeks to go but it does feel remarkably like Autumn right now.

I set off for town at around eleven yesterday, getting to Specsavers bang on time.  The hearing aid chap gave my hearing a thorough check and the good news is that it's hardly changed since the last time.  I'm really glad as it's been slowly deteriorating for several years now; a bit of stability is very reassuring.  Then I told him about the issues with my right aid (not the one that had the ear piece problem earlier in the week).  Oh, said he, it shouldn't be doing that - which was hardly news but never mind.  The outcome is that it's being sent off for repair and that will likely take a couple of weeks because, guess what - everything is taking longer at the moment.  At least he didn't blame Covid; it's an issue with the EU and they're not exactly rushing UK repairs at the moment.  Brexit, in other words.  Oh, well, I do have my old aid and the other ear is my better one anyway so it's OK.
Finally, the best news of all is that it still has a year of warrantee left so nothing to pay!

After that, as it was so lovely and sunny and town was busy but not teeming, I had a little wander around.  The Sunday street market is quite different from Saturday - it has a lot of individual crafty stalls and it's rather nice.
Remember I mentioned my Christmas decoration tradition the other day.  Well, on the hand made glass stall, I found a couple of ornaments that just fit the bill.  I have some of her decorations already so these two are just two more of the set.  After I had paid, I noticed another I didn't have but maybe another time.  It would be nice to have the set.
It's a bit early to have bought my decoration so, possibly, I might have to double up on them as we get nearer to the season; it all depends on what this year's trend is. 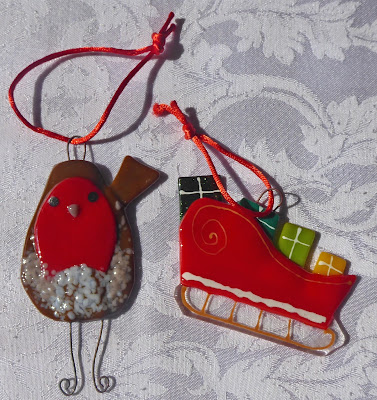 I got a few other bits and bobs and just enjoyed myself very much.  People mostly weren't wearing masks in the street but everyone was keeping distance from each other.  I felt quite safe.

On the way home I stopped off at the allotment to water and check the blackfly which all seem to have disappeared (for now).  That's good.  Despite a big picking of runners the day before, there were more so I grabbed them.  There are loads of little beans coming along but the flowers are fewer now so time is limited.  I reckon there's about three weeks' of beans left before they really tail off.  They're not as nice later in the season anyway - they get tougher and more stringy.  By then the dwarf beans will be producing and, they way they are growing, possibly the broad beans too.

Today is a really nice day.
I will do the allotment watering nice and early to get it done before a gentle start to the day with some washing and drying, not to mention the ironing from yesterday's wash.
Then I'm off to Lindsey's for the first in a series of small group circuits.  This is new to me so I'm not quite sure what to expect but it will be nice to meet the others in the group.
After that, I will rush home where Beth will be waiting (she has a couple of days off work) and we will head off to the Fox and Raven for lunch before ending up at Boots for the make up thing.  I'm both excited and nervous about this.  I used to slap on the make up in the sixties (didn't we all - remember those eyes?) but grew out of that and haven't really used make up at all since then.
Then it's home again and she might come with me to the allotment for another water before going home.