Morning, everyone.  The weather has broken, as expected.  It's dull, cool and wet this morning, definitely a day for staying inside and chilling.

I had a lovely time with Beth yesterday, thank you.  It was the film DVD we watched.  The singing isn't great at times but the visuals are fantastic and I never seem to get tired of it.

I broke a bit of a tradition after getting an email from Kelly's yesterday advising that they were producing the usual number of turkeys, their production methods not being affected by sundry 'shortages' but were getting an awful lot of inquiries about turkeys for Christmas.  The advice was to order early, if possible.
Normally,, I order during half term and, yes, I know we're not having turkey on Christmas Day this year but we will have it at some point over the festive season.
So I went online and now have one extra small turkey and two rolled breasts ordered.  The idea of the rolled breasts is that I can cut them into sensible amounts for two plus leftovers (me and Alex) for Sunday roasts and then freeze them.  It will be interesting to see quite how small the mini turkeys are.  I know the bigger they are, the better the value but, to be honest, buying a KellyBronze means that economy flies right out of the window anyway!

I've had various quotes from Seth following his visit last week.  They seem pretty reasonable and I'm getting the guttering done asap plus having the kitchen extractor fan replaced as it hasn't worked for ages  (it's just a wall fan, not a hood) and a drain cover replaced.  It will be really good to get those jobs sorted.

Another tick - well, half tick anyway.

I picked some French beans from the garden and took a few photos of other stuff while I was there.  You can see how sunny it was. 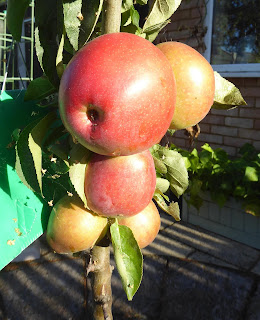 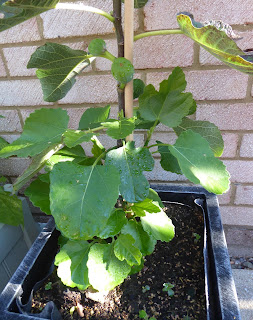 And here's the fig tree.  All that is new growth, supposedly next year's fruiting branches.  There's a few that are growing out the back that I will prune off because I want it to sit against the wall but it's all very encouraging.

I'm a bit late with this because I slept later than usual (nearly seven) so needed to get sorted and get off for my early morning shop.  I decided to do Sainsbury's today, partly because I wanted to and partly because they have a filling station.  However, it was closed so no luck there.

I'm now home and having a coffee before I get everything put away, sort out the fridge, etc.

Then it is just homey stuff, including a whole pile of ironing, until personal training in the afternoon - so I can collect a new set of aches!  :-)

And then, finally, Alex is coming over for dinner.  It's been a fight week for being hospitable - Dave and Anna on Monday, Beth yesterday and Alex today.  Phew.

Well, sitting at the PC won't get anything done so I'd better get the work started.  Have a great day, despite the weather.  xx