Morning.  It's dry and fine outside and looks as if there might be some sunshine again just like yesterday, I hope.

I was most excited when I did a trawl around the garden yesterday to see this . . . 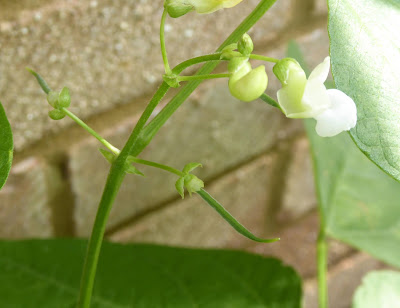 Yup - the dwarf French beans are producing.  OK, so it will be a couple of week before they are big enough but it's about the time when the runners give up the ghost so great timing.
Cute babies, aren't they?
I also took a few more photos . . . 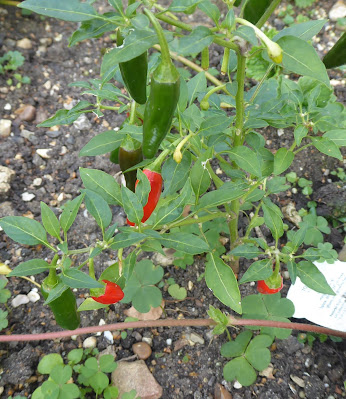 The little apache chillies are doing really nicely, as are the less fiery gusty purple ones.  I might pop some in the freezer although, to my surprise, if I leave them out on the window ledge, they dry beautifully.  I still have a few from two years ago which are still perfectly usable. 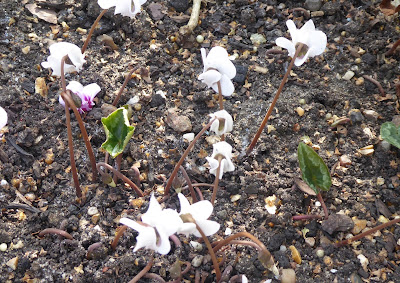 The middle bed is riddled with cyclamen corms (they are corms, aren't they?) and when the pretty, shy little flowers start emerging, it is a sign that summer is pretty much over and autumn is on the way.  The flowers come first, followed by the leaves which gradually take over and cover the soil with their variegated patterning.
I can never take good photos of the flowers, sadly. 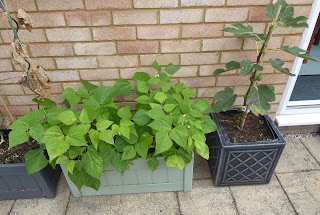 I will be picking the last cucumber later on today.  There are smaller ones but they are withering on the vine and the leaves are dying, brown and wizened as you can see just showing to the left in this photo.  I am sad - the cucumbers have been brilliant in a year when other things have done not so well as usual.  I will definitely be finding space for more next year, they have become a staple in my garden.
The dwarf French beans are coming on great as mentioned above and, to the right, so is the fig tree. 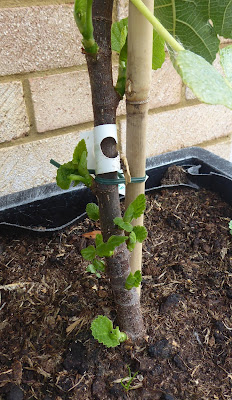 In the 'how to grow a fig tree' instructions I downloaded, one of the things it said was that when pruning the first time, you take off quite a lot of the central stem.  I was a bit 'oh, no, why?' about this but now I can see why.  If you look, you can see loads of new growth emerging from the lower part of the stem which will translate into branches and, maybe, fruit, next year.  I can start creating the shape I want (to grow against the back wall) by being selective about which of these new little shoots I want to keep and which to remove.  Scary stuff!
By the way, the three fruits that it came with have done nothing and will need to be removed when I pluck up enough courage to prune. 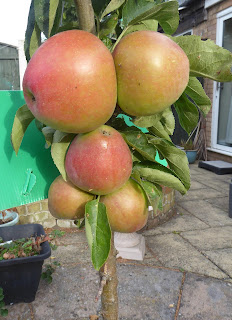 And finally, the light of my life right now, the flamenco ballerina!  One massive apple and five not so massive but equally healthy apples all coming along really nicely, starting to redden and looking delicious.
I have to be patient for three weeks or so as it is an October picker.
I drove to the allotment to water and pick, coming back with:
a bagful of runner beans
two baby corn
loads of raspberries
two redlove apples
three pears
and a laxton windfall
The runners are definitely on their last legs, desperate to finish their cycle.  The beans are becoming more woody and I know that when I get to process them, several will end up on the compost bin.
The baby corn is also more or less cropped out but I keep looking as the occasional one still pops up from where the stem and leaf meets.
There's still loads of raspberries coming along.  I'm glad because the ones at home have not been very successful this year.  I think I need to replace the soil in their container but there's plenty of time to do that.  As autumn cropping fruit, they fruit on that year's growth and don't get pruned until the new growth starts emerging - more or less early spring, in fact.
I thought I would try a redlove but they were too sharp and not really ready yet.  They blossom a bit later than the Laxton so I suppose fair enough.  The other two can be stewed and sweetened so I might make apple meringue at some point this week.
The pears look great so I have picked three of the biggest.  They don't ripen on the tree, you have to pick them and bring them inside so I won't make the mistake of picking too many at once and having them go off.
The laxtons are delicious and it is just a shame they were hit by what seems to be bitter pit.  I'll make sure I feed the tree better next year and, hopefully, that won't reoccur.  Most windfalls are too damaged by the time I get to them but there are always a few that are worth the cutting up.  I'll start picking off the tree in a few weeks.
Today there are two things in the list.  Circuit training at Lindsey's and tuition later in the afternoon - and I nearly forgot the latter after cancelling last week's.  I'm having a lazy start to the day but will get moving at some point soon, check over my planning, get things ready for circuits (towel, water, etc) and do the usual bits of housework needed.  I suppose I will also go and water at some point too although the ground didn't seem all that dry yesterday.
Have a lovely day, everyone.  xx