Good morning, everyone.  After a crisp and cold Christmas (some places even had a bit of snow, lucky them!), it's turned horrible again with heavy rain and, I gather, there are strong winds a-coming.  The temperature is due to drop again later on and overnight too.  As I so often say, I am sincerely grateful for good heating and a strong and protective home. 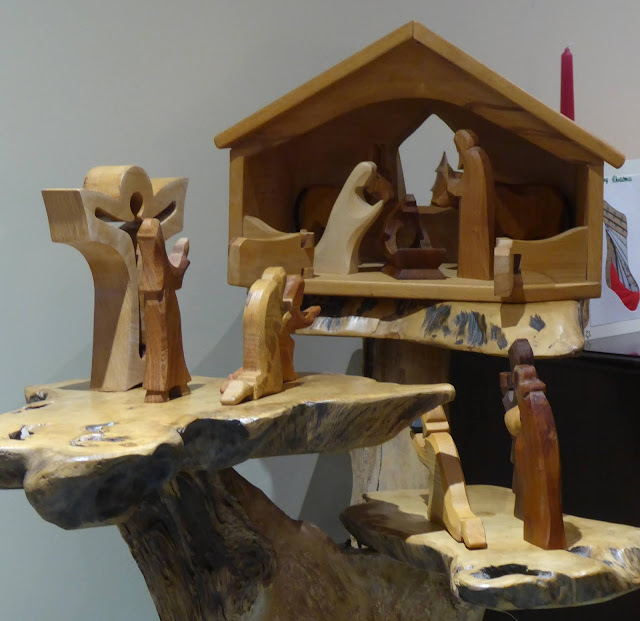 This will go down soon so one more photo.  Although some decorations stay up till twelfth night, from not until then I start dismantling some things and the nativity crib is one of them.  I polish it, carefully wrap each piece and put it all in a damp-proof box out in the garage.

Boxing Day was a good day.  There was rather too much alcohol floating around as my slightly muggy head testifies this morning, but I'm back on the old SW track again now, aiming to deal with my temporary gain and then to maintain.  We had another big dinner, me, Beth and Alex, with more turkey and vegetarian crumble, bubble and squeak, roasties and green veg.  The easiest meal of the week really; the only thing that I had to do was make the bubble and squeak.

The Christmas cake is still uncut, Beth has taken about two thirds of the Christmas pudding home for her and Alex to enjoy and I think I will cut up what's left and re-freeze it.  It's not meat so that should be absolutely fine.

As for the turkey - I'm dealing with it.  It was a very expensive piece of the Christmas table so I don't want to waste a single bit.
Yesterday I set to and stripped the cold carcass.  One and a half breasts became numerous slices and most of the rest came off in good chunks.
The carcass, stock, herbs, citrus - everything from the roasting dish - went into my Instant Pot for a slow bubble.  This morning I strained everything, stripped off the rest of the bits of turkey which will be perfect for adding to soups before putting the rest back into the instant pot, adding some fresh water to mix with the jelly stock clinging to the bones and bits and set it to bubble again for ages.
I don't do this second simmering with a chicken but I do with the Christmas turkey as there's still loads of flavour there.  Once that has been strained again, all the bones and bits will go out for council recycling and will eventually become potting compost or similar.  I love that absolutely nothing is wasted.

As for all that meat, some will be covered in turkey gravy and frozen for meals (some for Alex too), some will be frozen in chunks in stock for stews/hotpots (Dad lovely turkey hotpot so I will be taking some up to him as soon as it is permitted again) and all the little bits will be perfect for chunky soups.

Yes, it was costly, but making the most of it will produce quite a lot of meals and it becomes a bit less of an extravagance.

Today is going to be a quiet and restful day.  I have no visitors, will be doing no housework and have books to read and recorded programmes to watch.  I suppose there's a bit more foody/drinky stuff to sort out but slowly and without any rush.  To go with my new Nigel Slater book (which is lovely), I brought down other Christmas specials - Jamie, Nigella and Christmas Bake Off.  I must go and get the Delia one too, they are such treasures and I can enjoy them now without feeling that I am searching for ideas.

So, yes, that's me today.  Have a great day, whatever tier you are in.  There's still plenty one CAN do and remain safe.  xx