Morning.  Well, we had our two nice weather days but yesterday was 'orrible.  Rain, rain, nothing but rain!  Today isn't likely to be great either - it's still raining.  Oh, well!

The day trickled along.  I got plenty of stuff sorted out, rearranged, tidied up, etc, before my chat with Jackie.  We fixed that I will drive over with her card and a little gift next week but, obviously, won't be going in.

Victoria brought her creations round.  Just what I had asked for. 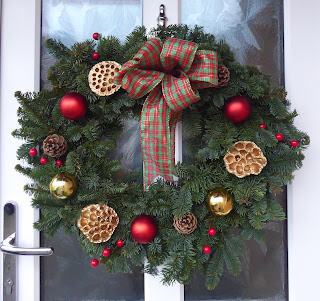 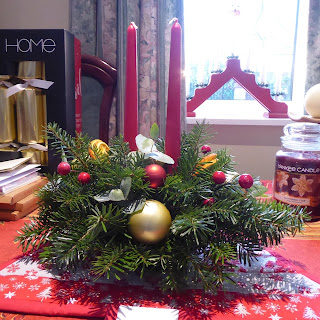 . . . a couple of table candle decorations thingies.
Later on, the cleaner (in the singular this week) came round and did his thing so everywhere is nice and shiny clean now.
Finally, I got a stack of ironing done so I'm up to date with pretty much everything now.
Today the diary tells me that I'm having a box of wine delivered.  We won't go short over Christmas now, will we.  I've got far too much really but that's life.
It also tells me that Jen (SW leader) will be in a certain place between two specific times, to hand out new SW booklets, sell the new SW magazine (it's cheaper when you get it that way), plus the new HiFi bars, etc.  Let's hope it doesn't rain too much!
The last bit of info in the diary says 'Ice Christmas cake'.  Hmm, I'd better look up that YouTube clip again.  It's not something I do more than once a year and last year was the first time.

So that's tomorrow.  It all sounds very pleasant and easy going, doesn't it?

The other is one I can't miss out - Away in a Manger.  It was a toss up between Kings and Libera; because the first is Kings, I went for Libera.