Good morning, everyone.  It's raining again - I've just dodged the raindrops to get to the shed for a few bits and bobs.  Beeb says expect heavy rain and a moderate breeze today so it's just as well I have absolutely no plans to go anywhere.  Tuesday and Wednesday I have 'essential' things to do but not today.

Yesterday was lovely.  I know I say that a lot and I know I'm fortunate to be able to say it.  After a restless night, I came down very early and got started on finishing off the stollen before I started the social mediating.  It came out absolutely lovely and already I am thinking I might make another one.  I think the (fortunate) slowness in rising was partly because it was an enriched dough but more likely to be because, when I checked, I saw that the yeast I used was ridiculously old.  Actually, it's lucky to have risen at all, in truth!
Anyway, it eventually rose satisfactorily, I baked it and it is absolutely lovely.  Of course, Beth, Alex and I sampled a bit and the rest is now sliced, wrapped and in the freezer.  It goes stale quite quickly son that's the best place for it.  Also - out of sight, out of mind. 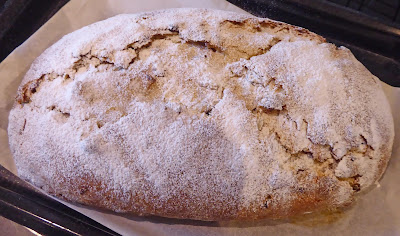 Not the best photo in the world and the light is poor in the kitchen anyway but here you go - with icing sugar rather than a sugar icing because of freezing it.

The beef went in early to slow roast to its heart's content and, by lunch time, it was so tender it pretty much melted in the mouth.  Diane will shudder - I know she and many others prefer their beef rare!

The cake is now decorated.  I'm not sure but Beth says it looks lovely - and it will taste as good as it smells, I hope. 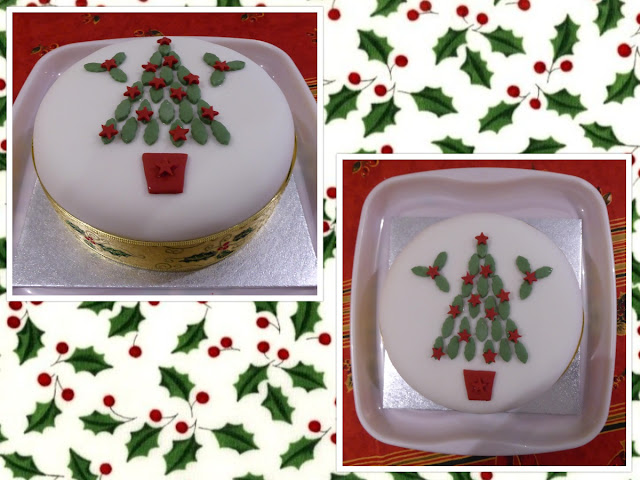 The extra bits either side(which I now wish I hadn't done but never mind) are a bit squiffy which is typically me but it's done now.  The container is a really old Tupperware cake box that has a sort of flat topped domed lid to keep the whole thing safe and clean.
So that's another thing ticked off the list!
Over lunch, we talked turkey and made plans for using up what will be considerable turkey leftovers.  Fortunately, turkey keeps for days in the fridge, properly covered/wrapped and equally fortunately, I really like it and have plenty of tried and tested leftovers recipes to enjoy.  We will now have just the one kind of stuffing.  Usually I do two, one vegetarian one for Beth and a meaty one for others.  However, Alex and I aren't fussed and Beth was given a very posh looking stuffing mix which she promptly donated to the Christmas cause so I'll use that.  They both requested 'loads of roasties, please' and Alex added 'with plenty of oil'.   I have to admit that while I really like the Slimming World style roasties, you get a much better crunch with a bit more oil.
We finalised the dinner which will be turkey, vegetarian savoury crumble, pigs in blankets, stuffing, roasties with roasted shallots, roasted parsnips and sweet potatoes, sprouts, broccoli, carrots, gravy and cranberry sauce.  Not bad for just three (but I really do want leftovers)!
Dessert is mince pie and/or Christmas pud and there will be a cheeseboard for any of us that has enough room.

In the afternoon we watched 'Miracle on 34th Street' followed by 'The Lion, the Witch and the Wardrobe' until it was time for Beth and Alex to go home.

Today the diary is blank.  I think I will make up the stuffing and pop it in the freezer and ditto for Beth's vegetarian crumble topping which is just a mixture of flour, butter, oats and cheese with some seasonings.  The bottom is just a beany tomato mixture and it's one of her favourites.  The pigs are already in the freezer so it's just a case of getting everything out on Thursday evening and letting it defrost slowly in the fridge (if there's room) or in the shed, if necessary.
Phew, thank you for reading as I have talked this all out with myself.  Now I have it all settled in my mind and know what I'm doing, there's no pressure.

For the last few days of Advent Calendar music, I am going to mostly include traditional carols.  One of today's is the old Polish carol, translated as 'Infant Holy', sung by you-know-who (no, not Voldemort!)
The other clip is 'Lo, How a Rose e'er Blooming', sung by the Cambridge choir and conducted by John Rutter
Posted by Joy at 07:29