Good morning, everyone.  It's a dry start to the day as far as I can tell and it doesn't feel terribly chilly either, although there's still potential for the temperature to drop - the coldest hour is just before the dawn, to coin a phrase.

I was going to move my dressmaking mannequin out of sight over December until Beth suggested this. 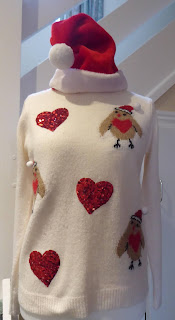 The Spirit of Christmas Jumpers!!
It will stay up until I want to wear the jumper and no longer!!!  It'll give the cleaners a chuckle anyway.
In the end, the morning chat with Val yesterday was short and sweet.  She'd forgotten and was about to go out to pick something up.  Ah well, never mind, we've rescheduled for next Wednesday instead, seeing as we can't actually get head to head yet.
Starting the Zoom chat with Dad. we had the same problem as usual in that he could see and hear me but I could only hear him.  However, we finally worked out what it is at last and it is connected to what Eileen mentioned about a web cam not being used for two functions at the same time (thank you so much).  Dad is turning his web cam on somehow - no idea how he does that as I can't with mine - in preparation before accepting my invite so, presumably, Zoom thinks it is already in use.  We closed the chat, I invited again and hey presto, no problems.  Phew; at least now we know.  We sorted out the cause of another minor problem too.  Dad's 'screen' has a flicker which has proven to be his strip light.  It's not bad and we can live with it but it was irritating to not know where it was coming from.
It was nice to see him and chat and all seems to be well his end
Personal training was good.  Lindsey is in the process of moving house (what a time, eh!!) so the room wasn't completely set up as usual, but everything we needed was there and she worked me hard (hard for me, anyway) as usual.  I enjoyed both the session and the chat.
Today is comparatively busy.  It starts with an online chat with Chris over the road.  Then I have a visit to the dentist, not for the implants (that's next week) but for a filling and starting work on a crown.  Not fun but necessary and I will be so glad when it is all done.
Next week it is the implant appointment and the week after that is finishing the crown.
Finally, Slimming World is face to face again so I will be off out for that, mask at the ready.
I should sleep well!

For todays' musical blogmas calendar, I chose a bright, lively, sing-along, well known number that has become a Christmas 'classic'.  I do like the Mel and Kim version but finally decided to go with Brenda Lee.