Good morning, everyone.
Despite a chilly start, yesterday turned out to be a lovely autumnal day, wall to wall sunshine, warm in the sun but much cooler in the shade.  Just perfect for a walk in the country.

I set out early-ish for a swim and found the pool almost empty so I was able to grab my favourite place, next to the central dividing thingy.  The pool is divided into three.  Half of it is for those who consider themselves very slow swimmers, a quarter is for slow swimmers and the last quarter is for fast swimmers.  I generally swim in the half part and like the central position as I'm out of the way of any who want to swim in a group - like the 'gossip girls' who turned up a few minutes after me.  It was a good swim and I enjoyed it.

Once home again, I made and ate breakfast and then got on with bits and bobs.

After lunch, it was so lovely outside that, prompted by another blog, I went out into the country, poly-bags in my back pack, for a pleasant walk and some foraging.  I came home with more damsons and more blackberries.  I could have picked loads more blackberries but I'm not sure what I would use them for nowadays.
Both hauls are now washed, bagged and in the freezer.

Since I last went that way, the verges have been mowed, making blackberrying much easier and, sadly, the hedges have been lopped quite considerably, thus removing some branches of sloes I was going to pick a bit later.  There are some left but maybe I will leave them for the birds - I have the damsons to make fruit liqueur and the blackberries for winter desserts and really don't need anything else much.  I'll pick more blackberries next time I walk that way and that will be fine. 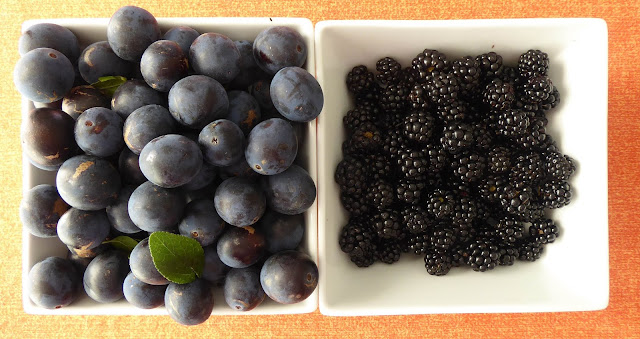 The leaves are definitely turning now and there were acorns and conkers on the ground.  I hope the latter will delight some young hearts in the next month or so, although playing conkers doesn't appear to be the thing it was a few decades ago.  Seeing those glossy beauties, fresh fallen from the tree, brings back some very happy memories.

Once home, I settled down for a good relax, read and telly fest.  It truly was a gentle and happy day for me.

Today I have all sorts of general bits and bobs to get on with including a couple of loads of washing which will probably have to dry inside as the forecast isn't great for today - indeed, I have just picked today's 'harvest' (runners, tomatoes and chillis plus one raspberry that didn't get as far as the doorstep!) and there are a few drops of rain falling from a cloudy sky with a pnkish tinge.

I want to start sorting out my kitchen cupboards again.  I have all sorts of dishes and bowls that I never use now and which someone else could perhaps make use of so it's time to deal with them.
I also might pop into school to see when the FS teacher wants me to start.  I'm guessing after half term but just want to make sure.

Then, after school, it's tuition.

So there's plenty to do today and it should be fun.  I hope your day is also fun  xx
Posted by Joy at 06:40