Good morning, all.  Welcome to the weekend!
We had another shedload of snow yesterday but it has sort of 'retreated#' from round the house which indicates that things are a little bit warmer that the last three mornings so perhaps it's all nearly over now.  Certainly, according to the weather forecast, things should be warming up considerably by the middle of next week so that's cheering.

I gave that pesky pipe the hot water treatment at regular intervals during the day and the boiler stayed on all day and through the evening.  Great.  It was flashing red this morning, which I kind of expected, but ignited when I pushed the button, which was a surprise.  Another indication that perhaps it's a bit warmer.  I should stay warm today too and the extra expense I have had will be balanced by not using any gas as well as the winter fuel payments and the cold weather payment which, I noticed, has been triggered, according to the Gov web site.

I had a nice surprise yesterday.
I didn't mention it before, but when I was staying at the Premier Inn at Cambridge there was a bit of a problem.  I took my own towel with me because I love my big White Company bath sheet.  After using it, I draped it well away from the bathroom so it wouldn't be taken (as per the notice) but when I looked for it later, it had gone!

I reported it, of course, and the young man on reception was very helpful, made enquiries, asked around, checked the laundry dept. but the laundry had already been sent off.  He said he'd take it on for me and, after filling in an online form last week, yesterday I got an email from Premier Inn to say they are refunding me a night's money to cover the cost of replacement plus a bit for compensation.  I'm very pleased.  I'll replace the towel and maybe put the rest towards another towel, just as a treat.  We have a White Company shop in town so I can pop in next week, once the refund is safely in my bank account or I might just order online.

You hear a lot of grumbles about Premier Inn but, I have to say, I can't fault the way they have dealt with this.  Quick, courteous and a positive outcome for me.

With all this sitting inside, I have been getting on with some knitting.  Part of it has been more clothes for knitted doll.  I found some fluffy yarn in the cupboard and now she has a keep warm sleeveless jacket thing (I forget what they are called) to add to her wardrobe, plus a crocheted poncho. 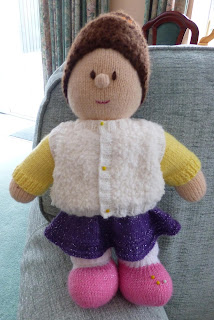 Today Beth might be coming over for a day's sewing.  It really depends on how bad her road still is (untreated, narrow, parking on both sides and on a hill!) and also how worn out she is after a week of driving to work in less than ideal conditions.  She, like me, worries about skidding and sliding on the road.

Assuming she comes, she will be getting on with the wonderful quilt she is making for her bed.  She's done all the tacking so, I think, is ready to start quilting.  It's not going to be heavily quilted, just round the 'ditches' of the rectangles.

If she doesn't, I may do some sewing on my own behalf and get on with that duvet cover.

Have a super day, whatever you plan to do, and, as always, stay warm and safe in this extreme (extreme for us) weather.