Morning, everyone.  I'm back to my usual waking hours today rather than the very late seven o'clock I woke at yesterday.  As I don't intend to go down a cave and up a mountain (ok, hill) to  Castle in order to sleep a bit longer, I guess early waking will continue in my life!

Sadly, the weather today is for a maximum of 11 and rain showers.  I don't mind the lower temperatures but Suzanne feels the cold a lot more, bless her.  Oh, well, there's nothing we can do about it so life goes on!

All our plans had to change yesterday!  We headed off into Bakewell, only to find that, to our dismay, there was some sort of market where we had expected to park.  We weren't the only ones to be caught out either.  It was rather packed with cars all turning into the roar and having to turn to get out again.  A bit chaotic.  We tried to find more parking space but failed so we decided on the spur of the moment to go back and 'do' Haddon Hall which we passed on the way to Bakewell.  That would have been a Very Good Plan, had Haddon Hall not been closed due to 'unforeseen circumstances'.

Really not our day!!

So we came home again (thankfully Bakewell is pretty close to Beeley, we hadn't driven for miles and miles) to have a coffee and talk.  It started raining at that point so we were quite glad to be inside anyway.

We had lunch at home and decided it would be quite nice to visit a few craft centres/shops.  We  had clocked Caudwell Mill as we drove to Bakewell and we found a couple more.  The one at Eyam was closed on Mondays but the one at Calver was open  so off we set.

Caudwell was a lot better than when I last visited which was a number of years ago now.  The glass workroom was open and we enjoyed looking at all the lovely glass creations.  Sadly, the silver workshop was closed but the general shop was open and we spent a long time looking around and admiring creations by local crafters.  I could have spent loads on some lovely pottery but common sense prevailed and I came away with a couple of gifts and a pretty little necklace while Suzanne got herself a couple of pottery pendants.

Then we headed off to the Derbyshire shop. 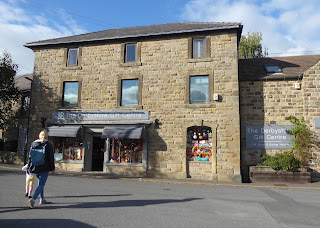 It had been designated a 'craft centre' but it wasn't, it was an Aladdin's cave of all sorts of bits and bobs.  There was a good display of Halloweeny/Autumnal stuff as well as - well, it's hard to say what it didn't have, to be honest.  Fun to look around.
Suzanne got herself some very nice gloves and I got some Autumn themed paper napkins and a wooden mushrooms on wood ornament.  I'll take a photo of it to show you in another entry. 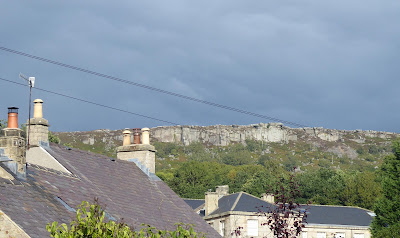 There was quite a nice glimpse of some of the peak rocks around the village - well, it would have been nice if it were not for the electric wires.  I might try to edit them out later on.
Buy then it was well past four so we headed home, had a cuppa and a biscuit apiece and settled down to chat and craft, me with my knitting and AS with her cross stitch.
Today it is Haddon Hall.  Fingers crossed it is open again.
Tomorrow, we hope to get to Eyam (the famous 'plague village') and spend some time there.
Possibly we will try Bakewell on Thursday.
And that's the holiday over.
I have already decided that I will be back.  There's so much that we haven't done.  Suzanne isn't that keen on a return so soon so it will be a solo holiday.  There are a few Premier Inns in the area as well as numerous B&Bs and cottages so I will have to cost things out and see what I fancy.  I could take a cottage and then spend just a few nights in a Premier Inn, maybe.
Time to stop and get the first coffee of the day, I think.  We're in no rush this morning so I'm feeling good and relaxed.
Have a lovely day!  xx
Posted by Joy at 06:36