Morning, one and all.  Day three of my holiday and we have rain!  Actually I got yesterday wrong - I was looking at the weather at home, not here .  Here was far less encouraging but we avoided any rain, thankfully.    Today's looks better than it was predicted yesterday.  We're OK with lack of sunshine but I'm very glad to see that there's no rain predicted today.

Yesterday was brilliant.  We took a nice drive up to Castleton, parked a little way out from the centre (it's a small place so it wasn't a problem) and walked to the visitor's centre first.
I'd already booked the tour of Peak Cavern and they told us that we could pay for Peveril Castle at the foot of the castle hill so that was OK.
We had a wander round the little town first.  Castleton is right in the heart of the Peaks, between the more gentle White Peaks to the south and the higher, more rugged Dark Peaks to the north.  It is famous for its four cave systems.
Speedwell Cavern is water filled and can be explored by boat (guided, of course).
Treak Cliff Cavern is a bit out of Castleton, close to Mam Tor.  It is where the unique Blue John stone is mined but it used to be mined for its lead.  It has some interesting stalagmite and stalactite formations.
Then there's the Blue John mines themselves.  These are several caverns that show the mining, fossils, stalagmites and stalactites and is also close to Mam Tor.

And then there's the Peak Cavern, the one we visited.  It's the most natural of the four and is called the Devil's Arse because (the tour guide said) people were kept away with warnings that if they went in the Devil would get them but also because the lower parts of the mine flooded regularly (still done at times, I gather) and the pressure of the water forcing air through the smaller passages makes a very farty sound that is then amplified in the huge cave opening and sounds right across the valley, presumably sending all the children into fits of giggles! 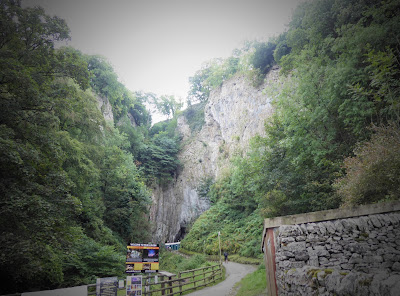 The last bit of the walk to the cave opening.
We were warned that inside the cave it is a steady 7C, regardless of the weather outside.  Also that sturdy shoes are essential.
In the past, Peak Cavern was the least commercialised of the caves as it had no valuable seams of mineral. 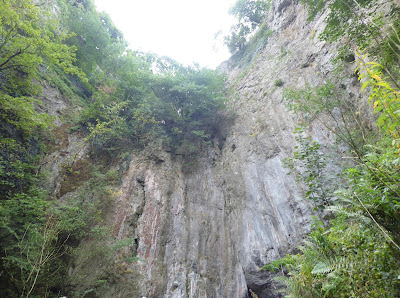 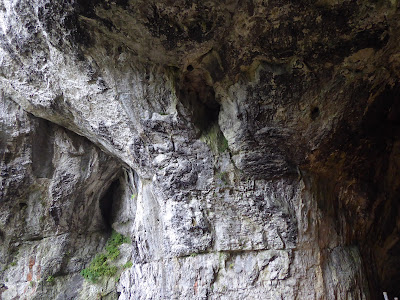 I took plenty of internal photos but, to be honest, they all look much the same and don't show anything.
There is plenty of evidence of glacial and water erosion and some baby stalactites on the roofs which are hard to see.
Access is fine at the mouth of the cave but it descends quite steeply (there are some steps) and then there's a corridor of about fifteen metres that must have been tiny but which was enlarged when Queen Victoria visited the mines and they gave 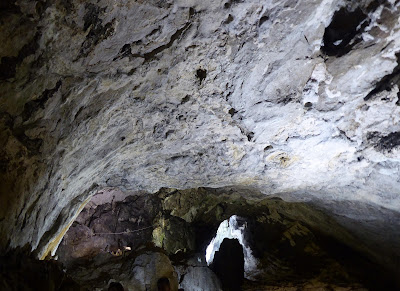 her a concert in the large chamber beyond.
She flatly refused to bend so they enlarged the passage just enough for her - so the rest of us still have to bend in order to go further, she being around 4'11", I gather.  She was a little lady!
They still hold concerts there but in the mouth of the cave, where the rope makers lived.
The acoustics, I gather, are excellent but it's chilly.  They tried using big gas burners to warm  up the entrance but it obstinately remained at 7C so now everyone wraps up warm!
So that was Peak Cavern.  The complete tour, with demo, etc, was around an hour and a half and it was so very interesting.
Then we had lunch and a warming coffee before tackling Peveril Castle.
Rather than go through its history, here's a link to the relevant part of the English Heritage site
https://www.english-heritage.org.uk/visit/places/peveril-castle/history/

and to the Wiki page
https://en.wikipedia.org/wiki/Peveril_Castle 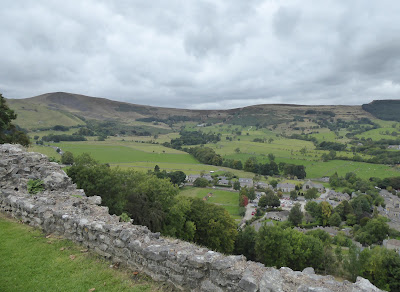 It's a fair old puff up the very steep hill that the castle is built on.   I may be missing all my exercise classes this week, but yesterday more than made up for them!
Access was via a sturdy zig-zag path with benches thoughtfully provided now and again.  We reckoned we did OK for two ladies in their seventies!
You can see Castleton in the valley and you get an amazing view! 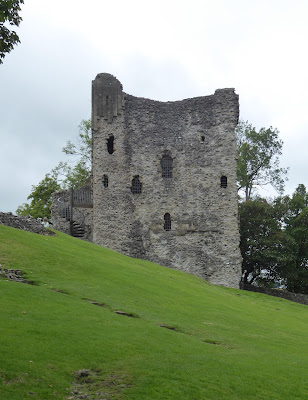 There's not much of the old castle left now but plenty of footings to show where outbuildings and walls would have been and the keep itself can be accessed at the middle and there's an original spiral stone stairway to get to the lower level. 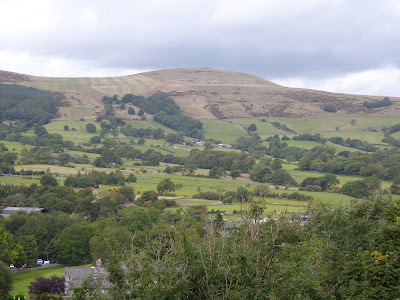 I'd have taken a panorama photo but my camera battery had given up the ghost - very annoying!
We made our way back to the car and came home feeling that we'd had a Very Good Day Indeed!
Today we plan to explore Bakewell and you never know - A bit of Bakewell pudding might be consumed at some point!!
The sun is now shining (yay) and I really ought to think about getting up, showered and dressed so I will love you and leave you for now.   Have a fab day, everyone, and thank you for reading my ramblings!  xx