Morning, everyone.  It's nearly half past six, still completely dark and raining - at least there is rain on the window so it is or has been.  However, yesterday was an absolutely gorgeous day. 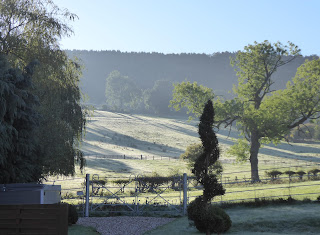 It started with a fair old frost that gave our back view a magical quality.  It was so beautiful. 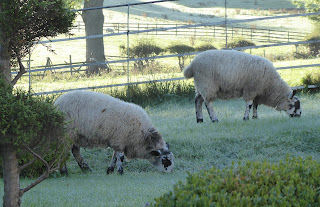 However, a couple of random sheep thought the grass looked a lot greener our side of the fence and somehow got through the fence.
We didn't see how they got in and we didn't see how they got back out either.
After a jolly good breakfast, we set off up through Baslow and on to Eyam, the plague village.
Here's a link to the Eyam story - it is very sad and one can only admire the courage of the villages as they stayed put (mostly) and rode it out rather than escaping and spreading the plague further.  They paid a heavy price: some families were totally wiped out and the death rate was higher even than London.
https://www.historic-uk.com/HistoryUK/HistoryofEngland/Why-Is-Eyam-Significant/ 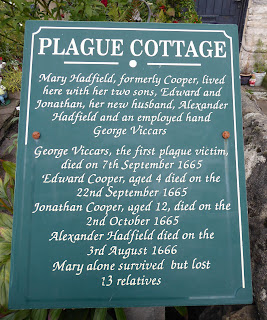 We found a free car park near to the little Museum, formerly a Methodist chapel.  It gave the background to various plagues through history, the Eyam story, various ways in which doctors tried to combat the plague and the damage it did in Eyam.
Then we walked down towards the Hall (closed), the Hall Courtyard (open but not particularly interesting - I'm sure it was better last time I visited which, admittedly, was a long time ago), past a row of cottages that had plaques with information relating to the plague at Eyam and on to the Church. 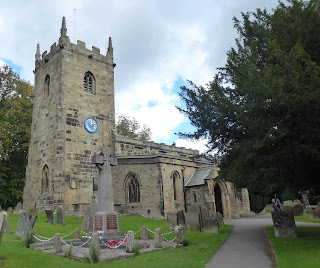 The church was lovely.  Quite small with well tended surroundings and decorated for Harvest Festival. 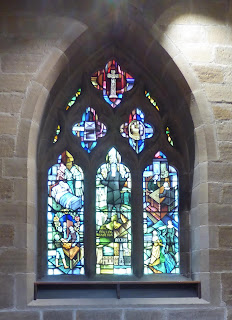 It had a more modern window commemorating the plague story and the central role played by the then vicar, William Mompesson, and his wife. 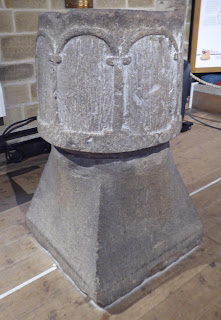 It had two fonts, a Saxon font and a Norman one.
This is the Saxon font - the other was hidden pretty much behind flowers, apples and some pictures done, presumably, by the Sunday School or the children of the village school (or both!)
There were other interesting bits and bobs including a chair that was said to belong to Mompesson, a book in which were recorded all the victims and their dates of birth. 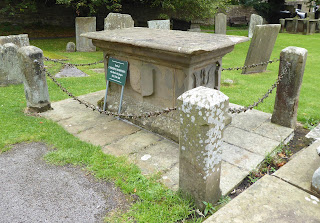 Outside there were various graves of plague victims including this one, of Catherine Mompesson.
We also saw a very old Celtic Cross in the same part of the graveyard.
Finally we went back to the Courtyard to a nice restaurant and enjoyed a starter as a lunch.
And then we went on a beer hunt.  No, not a bear hunt, a beer hunt.
When we were in Cromford Mill on Tuesday, we bought a bottle of ale to share with our dinner  that evening.  It was called 'Quarantine Ale' and very, very nice indeed.  The lady in the shop had told us it was produced at Eyam so we looked for anything like a beer place to get another and failed to find one.
We asked the lady who served us our lunch and she knew exactly what we meant, telling us that the Eyam Brewery, a very small local business, could be found a few miles down the road at Hucklow.
Here's their site:  https://eyambrewery.com/   You can see a little picture of that Celtic Cross at the top of the page.
So we set Genie, the Sat Nav and off we went.  It wasn't totally straightforward but we found it in the end, a little business centre with the most amazing views over the hills and a very pleasant young man who must have been pretty surprised that two elderly ladies turned up in search of his Quarantine Ale.  But we got a box of twelve - we had to buy it in boxes - and had a good old chat before taking some photos of the view and making our way home again.
I may very well order from them again and, if you like beer and can cope with twelve bottles at a time, maybe you could consider supporting a small business? 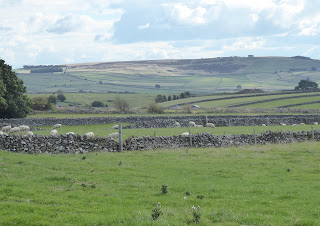 Imagine working every day with views like this, eh!
Maybe not so nice in winter when the snow can be feet deep and it is a struggle to get to work (he said).
The one below is a panoramic shot.

On the way home, we popped into the Chatsworth Garden Centre (not the Farm Shop) which was an amazing place, absolutely huge and fun to look around.
Suzanne got herself a lovely warm top  and I found a fruit cider for Alex, who loved fruit ciders.  We both bought socks (on sale) and Suzanne some tulip bulbs.
Looking at the books, we saw one that made us laugh.  It wasn't the iconic 'We're going on a bear hunt' by Michael Rosen, nor was it 'We're going on a beer hunt', it was 'We're going on a BAR hunt' and it was funny.
It starts:
We're going on a bar hunt.
We're going to find a cool one.
The babysitter's booked.
We're not old!
Google tells me there are some readings of it on YouTube, if you're interested.
And then it was home sweet home and I concocted a pasta bake from leftovers, offs and ends.
Today we have decided, much to my delight, to go to Little Moreton Hall.  I didn't want to push too hard for this because I'm coming back but Suzanne looked up various places on the list I made last week and really liked the look of it.
It means more driving but she was happy so to do so that's today's expedition.
And then we are eating out this evening at the Grouse and Claret (pretentious name, maybe, but the menu looks good).
It should be a very pleasant Last Day.  You have a good one too.  xx