Good morning, everyone.  After a dull morning, the sun came out, thankfully.  We're becoming used to brighter weather now and it certainly lifts the spirits.  Beeb thinks today will be nice and sunny but there's rain just over the horizon (Tuesday).

I had a frustrating half hour or so yesterday morning.  My printer had lost connection with the PC and refused to print.  Of course, the first thing I should have done was turn off the router and printer and turn them back on again but instead I went all round the metaphorical houses, failing each time, before going online to ask.
Of course, it worked!

Here's the evidence of recent creativity.  May I introduce you to Mr Rabbit and his carrot. 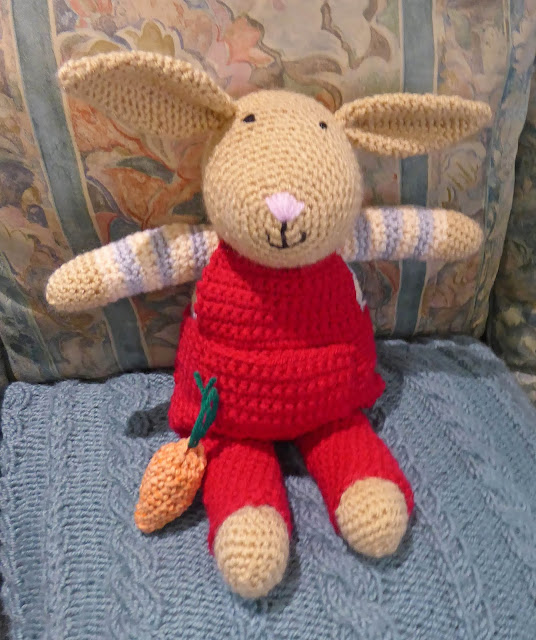 It wasn't the easiest pattern to follow and some bits were, frankly, just wrong, particularly the bit that described where to make the slit in the dungarees for his tail to poke through so poor Mr Rabbit has to go through life with his tail stitched to his trousers but, dear me, worst things can happen.  I have no idea what I'm going to do with him - yet.
What to start next?  Maybe a Jean Greenhowe pattern?

I didn't get to the allotment yesterday.  I decided I rather fancied wearing a dress and that's not really compatible with allotmentating - and I was too lazy to change.  It wasn't such a warm day and there was plenty of cloud so I am sure the little plantlets will be OK until later on today.

'Love Never Dies' was . . . OK.  Not something I'd have been happy to pay a lot to go and see but I spent a mildly enjoyable couple of hours watching it.  I wonder what the next one will be.  I do hope they show Cats at some point.

Something energetic:
It's back down t'allotment this morning for an early workout.  I'm going to fork over the prepared ground to keep it nicely broken up, water, of course and I might sort out how many usable garden canes I have there.

Something in house and garden:
I will pot on more of the baby plants today.  There's washing and ironing to do as well as all the usual stuff.

Something social:
Perhaps a Beth chat!

Something creative:
I'm going to dig out my Jean Greenhowe patterns and see if anything jumps out and shouts 'Make me, make me!'  In the meanwhile, with odds and ends, I have started crocheting a small, dolly-sized bed blanket.  Why?  Because I can, that's why!

Something entertaining:
I have no idea right now.  I've just started reading the first of the Mrs Tim books and am really enjoying it so maybe I will stick with that today.

Well, it looks pretty bright out there so fingers crossed for a sunnier day and I hope it's a good-un for us all.  xx