Good morning!  I suppose the term 'bank holiday' has lost most of its meaning right now but if you are doing something special, have a happy one.
It was lovely and sunny yesterday morning but gradually it got hazy and later on in the afternoon we had a few rain showers.  I couldn't be sorry as it will make my allotment work all the easier this morning (weather permitting).  I am in the middle of prepping the uncovered area for planting/sowing:  Jeff had turned it all over for me but, being very clay-ey (is that a word?) around here, the lumps had set solid and need breaking up by hand.  I watered the bit I was going to do yesterday and that did help but some rain that's really soaked in will make the job so much easier today.  Not too much, mind, of it will be nasty and sticky.

I said more than a few rude things when I got to the allotment.  All the carefully laid cover had been scratched and torn, presumably by a cat although Beth said it could be badgers.  I suppose it was a bit daft to use membrane really but it was all we had.  I've now ordered some super-strong ground cover from Amazon that should be arriving by the end of the week and I will just cover over the existing and not fit for purpose existing cover with this.

Given that we had problems with cats before, especially using the two little raised beds as a loo, I also spent some time concocting a cage from stuff in the shed to cover where the broad beans have been sown and I'll make one for the other bed (carrots, radishes and beetroot) when the netting (ordered that too) comes. 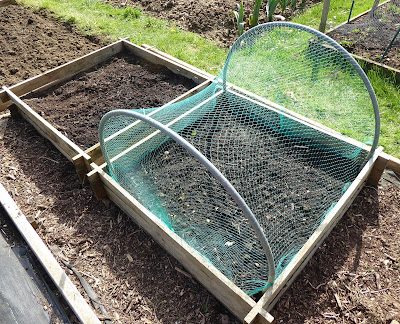 The rhubarb is doing nicely.  There will be more to pick tomorrow - Beth can have that as I still have some in the fridge.
(the dandelions are next door's, not mine, although if I don't get going with the strimmer, I will have some too)

The rest of the day was spent sewing and knitting.  The dress is going nicely and I'm taking it slowly and carefully.

I intend taking today easy again.  It's still part of the Easter 'weekend' so why not!  Also I'm feeling quite sad.  A dear old lady, a very good friend to my brother in the USA and godmother to his 'children', passed on last night after contracting covid-19 at her care home.  Thinking of all affected - and there will be many very sad people as she touched a good many lives in a positive way.

Something energetic:
Allotment.  I'd really like to have all the uncovered but done and ready for planting/sowing by the end of the week so that when things are ready, they can go straight in.  Also, if I remember, I will take the strimmer (and battery - MUST remember the battery) with me and do round the edges and as much of the long grass as the battery will permit.  This car standing grass is an utter disgrace to a decent and law abiding allotment!  It's not forecast to be that warm today and at eight there's supposed to be some rain so I will just see how it all goes.  Going a bit later means more people around but all at several metres (or more) distance from me so I'm not the least bit worried.

Something for house/garden:
One of the things I didn't do yesterday was deal with the whitebells and it really is obvious now where they are so that's on the 'have to do' list.  A bonus is that one can see some soil once they've gone which makes the bed look less scruffy, despite the other bulb leaves dying back.  I notice that the perennial geranium is coming along well but that's been hidden by the bulb leaves, so I must clear around it carefully.

Something social:
No chats arranged today but I must sort something out with Val and also with 'the girls' for later on in the week.

Something energetic:
Carrying on with the dress and I'll look up some patchwork things and see if anything catches my fancy.

Something entertaining:
I have a great long list of things to catch up with so I'm not looking for anything else at present.  I started watching Matilda yesterday but was fighting to stay awake so I gave up and will continue today.

Well, better stop rambling and get on with the algebra.  I'd like to finish it in the next day or two but that won't happen if I don't do it, will it?
Have a safe and healthy day - and have some fun too.  :-)  xx