Today's garden happy - several dahlia flowers.  I love the variation and it is starting to look a picture beside my front door.. 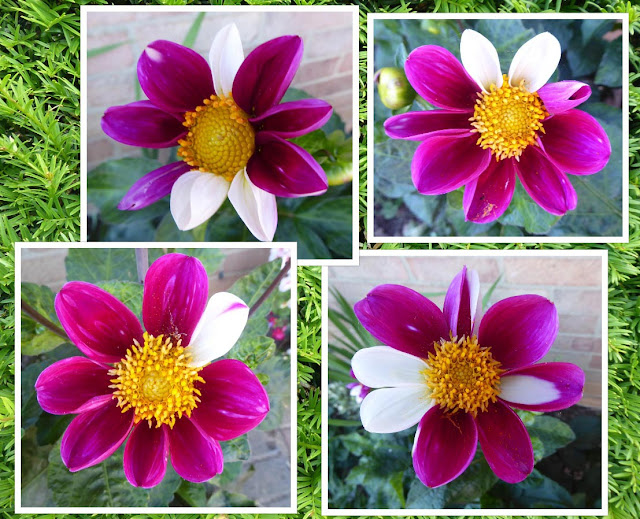 Good morning!  Obviously, another sunny start to the day and the temperature is due to rise to around 30C in the afternoon.  Definitely a good excuse to go for a swim!  It is in weather like this that I am super grateful for the trees next door that shade my garden later afternoon and into the evening.

Yesterday started with an early morning swim - well, an eight o'clock swim which is as early as the gym opens on Sundays.  There were a surprising number of people waiting outside, not only for swimming but also for the machines.  I expect they wanted to get it done before the heat started up and it really was very pleasant at that time - warm but fresh.
The Gossip Girls were there in force so I went into the first designated lane (for 'slow swimmers') and did my ups and downs, ups and downs while they monopolised the wider space - they were swimming, it was all fine, I'm not criticising them at all.
I was right - one of the Girls is a lady from our SW group.  I recognised her and she recognised me before we got changed and had a little chat, which was nice.  I'll see her again on Friday.

The sponsored swim for GOSH is going well.  I now have just 800m to go so, realistically, that's two more sessions.  I'll post the link to my Giving Page at the foot of this post, in case there's anyone who would like to donate to a very worthy cause.  Thank you again to all of you who have already donated.  It means a lot to me and I'm very grateful.  xx

After the swim, shower and hair drying session, I came home and battled a bit more with my hair.  The chlorine is playing havoc with my usually well conditioned hair so I've started using some more 'intense' hair conditioner for a while and that's certainly helping.  When I'd finished, it looked much less birds nest-y and more what it should look like.

the rest of the day was spend doing the usual little things.  I did three loads of washing (one load was the swimming stuff) and by the time the second load was washed, the first lot was dry so I was able to get it ironed while the second load dried.  I do like to get ironing over and done with fairly pronto although I really MUST take it all upstairs and put it away shortly.

I emailed Gail and arranged to meet her at Dad's the day before completion so we can go over the place from top to bottom and make sure it is 100% ready.  The Bradshaws have been so very good about us leaving things we couldn't get rid of that I want everything else to be perfect for them.  I suspect it will be very emotional for us both - Gail has looked after the house (and Mum and Dad) for years now.

It was quite warm through the afternoon but, thankfully, not humid, so really rather nice and it cooled down OK in the evening.

Today I was planning to go fruit picking again first thing but Lathcoats PYO is closed today to allow more fruit to ripen so I'll go Wednesday instead, if possible.  That being so, I'll do my weekly shop this morning instead.  I really don't have much to get (which might be famous last words but fingers crossed) but there's always fresh stuff and dairy, isn't there?

Later on, it's circuits.  While I do enjoy circuits, I'm not really looking forward to exercising in the heat so will take plenty of water with me.  Following that, I'm off for my swim so that should cool me down very nicely.  I've found that a swim afterwards stops the muscles from getting a bit achey; it stretches and relaxes me very effectively and the five minutes in the jacuzzi afterwards is simply bliss!

Then it's home, James, to sit in the shaded living room with the fans blowing.  I'm expecting the ones I ordered last week to arrive at some point today but, if they don't, it's not the end of the world as I do have a couple, one of which is rather old and rattly.

So that's my Monday mapped out.  Fingers crossed it all goes according to plan.  Have a good day too and try to stay cool and hydrated.  xx

Here's the link to my Just Giving page.
https://www.justgiving.com/fundraising/joy-clark3