Today's garden happy - well, not exactly a happy but so attractive, I think.  One of my blueberries is shedding its leaves early.  I'm not worries, it's done it before and been fine the next year,  Under watering - and that's my fault.  I left it, expecting rain (it is ericaceous) but none came and I just forgot - ooops. 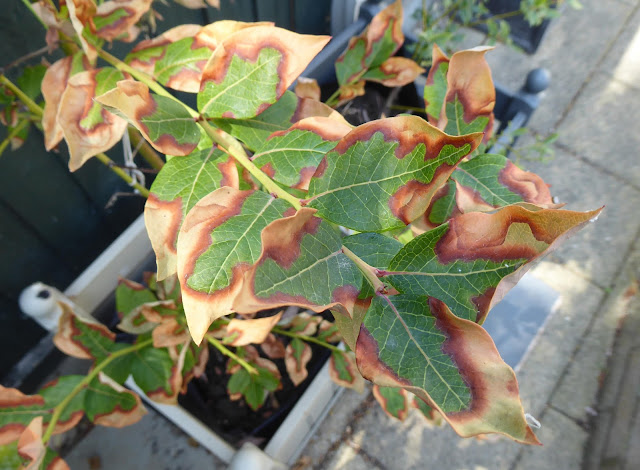 Morning, everyone.  Yesterday definitely lived up to expectations.  It was 36.1C in the shade in the garden at its highest and it's going to be hotter today.  In the house, it remained pleasantly cool until very late afternoon and even then the fans kept the worst of the heat at bay.

I managed to get my shopping done in comfort.  It was nice to see the children going to school wearing their nice, cool PE kits - shorts and white T shirts -with sunhats and carrying big bottles of water.  Very sensible.  I didn't have a big list but Morrisons had chicken on special so I rather stocked up.  I do eat such a lot of chicken in various ways.  They also had plenty of bags of ice and some juice ice lollies - not many as people have obviously been going for them rather than the ice cream based lollies.

I watched the graduation ceremony that we should have been at on the live link provided.  I shed a few tears right at the start but after that, while the speeches were good (and short) the rest was a bit boring really.  There were significant gaps in the audience and in the rows of graduands and those robes and mortar boards looked terribly hot.

And just to confirm that we made the right decision, the A12 was closed, both lanes, around Colchester for a 'police operation', just at the time we would be driving along there on the way home.  I am so glad we didn't get caught in the tail backs.

I gt some news that made me very, very happy yesterday evening.  A young adult (now) with additional needs who I taught in year 1 and was involved with for several years, as SENCO and then as their tutor, fighting hard alongside their mum and the school to get a statement (or whatever it is called nowadays) and a place at one of our excellent local 'special' schools for secondary, has won a Jack Petchey award.  Alex won that award several years ago so I know what it's all about but here's a simple description from Google.

Who gets a Jack Petchey award
outstanding young people

Our flagship programme is the Jack Petchey Achievement Award Scheme, which recognises outstanding young people aged 11-25 across London and Essex.
I am so proud of them - it is a significant achievement and means so much, both for now and for their future.
By bedtime, the bedroom was too hot but I took the fan up with me and it was OK.  I woke in the middle of the night, turned the fan off and opened the window wide and it was lovely!
As for today - well, at the moment all windows are wide open to catch as much fresh air as possible.  My water bottle in in the freezer, ready to take to Lindsey's Groove class at 9:15.
The garden has had a long and thorough water.
The full jug is in the fridge.
After that, basically, it's the same as yesterday.  Beeb says 39C which is too hot in my book but Wednesday is predicted to be a good twelve degrees cooler so just a really nice summer day again with, maybe, some rain showers later on.  Bring it on!
OK, so better go.  Take care, take all the sensible precautions you can, don't push things and remember to empty and refill that water bottle or glass several times.  xx
Posted by Joy at 08:45