Morning, everyone.  I'm back again after a day off yesterday because I was at Dad's with John, doing some more sorting out.  It was a gorgeous day, sunny and quite warm once the early morning chill had gone.  Today it's too early to say but light clouds and a gentle breeze sounds OK to me.

The drive up on Friday afternoon was very easy although I don't enjoy these drives now that the house is empty.  I was very glad John was coming down too.  His journey, of course, is a lot longer, all the way from Jedburgh.  It's a straightforward route, just very long.

He arrived about half an hour after me and we had a take away Chinese as we talked about what we planned to do on Saturday and had a reminiscing session.  Bittersweet, sad in a happy and grateful way, if that makes sense.  He filled me in on how the whole 'estate/probate/death duties thing was going (quite well really) and I filled him in on what else needs clearing, sorting out, etc.

So on Saturday John went into the attic and I waited at the foot of the latter and he passed stuff down.  Quite a lot of stuff but Dad and John had 'done' the attic several years ago after which nothing else was put up there because neither Mum not Dad felt confident enough with the ladder, even though it is a good, substantial, pull down one.
So, although there was a lot of stuff, none of it was rubbish stuff.

This is not long after we started, looking down the landing:  spot John! 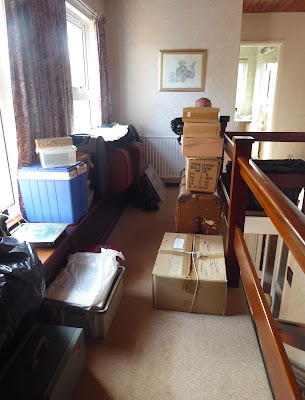 John had brought the van down - he manages a couple of scrap stores in the Borders - and we loaded much of the attic stuff into the van because he could either sell or use it in the stores (this was Dad's wish).  There were loads of flashback moments as we found stuff that took us back to childhood and early adult life - the old trunk (which you can see in the photo) had a label on dating  1973 with 'to be collected from Kings Cross' on it from my first term of teaching when I moved to a flat for a few months before marriage.

I have brought home some of the Christmas stuff, including a big Jean Greenhowe knitted Santa (not by me) and a set of Nativity figures that I did knit for Mum about five years ago and which I truly didn't want to lose.  Mum was not well by then; I showed her a set I had knitted for some one else and she loved it so much that I set to and made her a set  in about three weeks flat.  She was so thrilled with it - very happy memories.
I also brought home a few things that Beth made in her Kitty Stitches days and some smocked baubles that they bought from Germany decades ago and which I have always loved plus some other bits and bobs.  They will join my collection of special ornaments.
I haven't unwrapped the Nativity set yet. 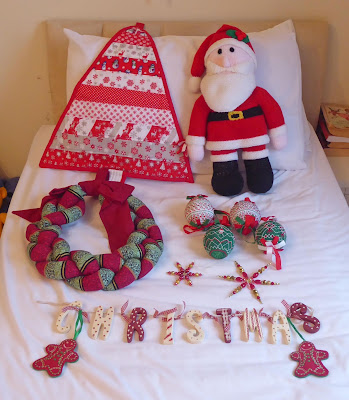 Once we had sorted the attic which is now almost empty, we tackled one of the other elephants in the house, Dad's office (the last one is the garage!).  Oh, my!!  The thing is, there's some stuff that needs keeping until all the financial affairs are sorted - we both have a dread of throwing away some piece of essential paperwork - but that left an awful lot of office stuff.  Again, I took a few bits and pieces - some Pritt-sticks, for example, some batteries and so on while John took the lion's share for the scrap stores.

We found stacks and stacks of old family photos from the fifties and sixties and before, which have joined the others that Beth and I sorted in August.  When Dave and co are able to come over from the USA without restrictions, we can have a mammoth 'do you remember' session over a buffet and some wine.

And we found this - an object lesson in why you should get your documents checked by someone else.  Just after Dad retired, he set up his own little company for a while.  I think it just broke even over the years but it kept him busy and occupied in those first years  after standing down from a very busy and satisfying career.
Please don't read if you are easily offended (and that's not a value judgement, I just don't want any reader to be offended) but John and I laughed until we almost cried when we read it.

Oh, dear!
And finally - does anyone remember these? 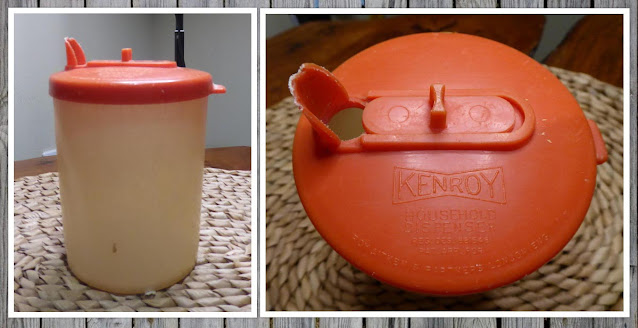 When I was a little girl, Mum had a whole set of them in which she kept various household cleaning stuff.  I found this in the back of the bathroom cupboard and it took me right back sixty years or so.  I've looked; it's not worth anything but, to me, it's priceless.

By mid afternoon we were both flagging so we tidied up, finished packing and both left.  John had a long journey, of course, but it means that he has the whole of today back at home to R&R.
We got a lot done.  The attic is pretty much completed, the office isn't by any means finished but it's started, the bathroom is now clear of any clutter and we even started in the garage, John taking various tools, etc while I made note of some things I can clear next time I go.  We are still not sure when the house can go on the market but John has been keeping a close eye on sales there and says that houses are selling very quickly, sometimes within a day of appearing, so that's encouraging.
It was a very active day yesterday so I'm feeling quite tired this morning but don't have loads to do really.  I want to plan tomorrows tuition session, get all the ironing done and go to pick stuff down the allotment.  And that's about it really.
Have a great day yourself . . . keep warm, stay safe and be happy.  xx
Posted by Joy at 08:35