Morning, everyone.  It's still dark, of course, but I've been out to get supplies for the day from the shed and it's both dry and milk so fingers crossed for a pleasant day.

Yesterday passed gently with one surprise.

Chris and I had a good old natter, as always.  I'm sure we talk about stuff everyone talks about - petrol, Covid, the dire state of our national political scene, families, etc.  While we were chatting in her front room, a van drew up and it was one of my parcels of yarn.  Yay!
It wasn't the yarn that I wanted for the pattern I linked to the other day but for one of the free downloads so, surprise, I sat down straight away and started.
It's a nice stitch, a sort of honeycomb effect and one I've not come across before.  It's a bit slow but, hey, it's chunky so 'slow' is comparative!  One good thing is that it is more or less self checking and one couldn't go more than a row wrong without realising - just as well because to pick back and remake would be pretty well impossible.
I've tried to take a photo but the colours are all wrong, they're not the least like the photo - much darker and there's no orange, nor is it purple in the least.  However, you can see the stitch. 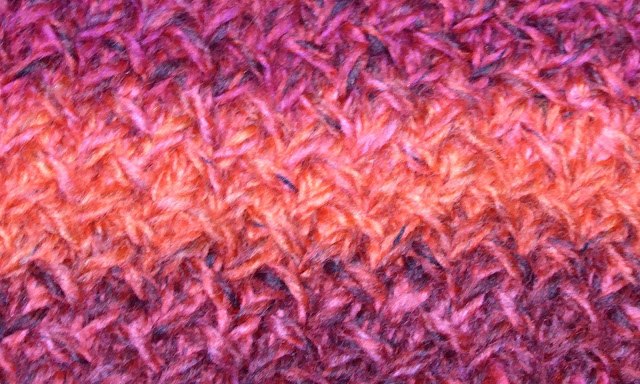 I managed to put it down to do my weekly shop and now I have all I need to start off the Christmas cake on the 19th (family tradition).  I'm not going too fancy; just a bag of mixed fruit and peel, some glace cherries, some cranberries and Cointreau instead of brandy.  The house should smell nice while it's all soaking.

The surprise was a text from Alex saying could he come over for a chat followed by something to the effect that it wouldn't be a special chat, just a 'normal' one, bless him.
So I had a lovely chat with Alex.  He didn't stay for dinner because he's not keen on fish and that's what I was having.

Today is the same as usual.  Slimming World, tidy house, cleaners come, nice, lazy evening.  And knitting.  What's not to like there?
May your day be as nice as I expect mine to be.  xx