Good morning!  It's dry this morning, unlike yesterday when it absolutely lashed with rain until around ten o'clock, but it is clouding over and the Beeb forecast is absolutely dire . . .

. . . as you can see in this not terribly clear screen grab.
So it's just as well I have planned a nice, self indulgent, inside day today anyway!
Yesterday first though.
Because of the rain, I drove the short way to Slimming World rather than walking where I was on the weigh in desk after weighing myself.  One and a half off - yay!  For those unaware, I did get to target last summer but in the unsetting times before and after Dad's death in June/July, I comfort ate and drank and gained again so it's steadily working back down to my target range again.  As we say, slow and steady wins the race and, if you follow my other blog, you will know I eat well and widely.  No diet deprivation in this house!  :-)
After that, it had stopped raining so I decided to take a little drive to the two closest filling stations, just to see if.  The first one was closed but the second one was open and the queue really wasn't that long, mainly because it was limited to £30sworth per customer.  That was fine for me, I wasn't anywhere near empty, just at the point where I was thinking about when to fill up.
You see, for the past five years or so, while first Mum and then Dad were not 100%, I got in the habit of making sure I always had enough duel in the engine to get me to their home and back again, just in case there was an emergency (and there were some from time to time).
So now, when I get to that point, I start feeling slightly uncomfortable, even though the need is no longer there.  Habits are hard to make and harder to break, don't you think?
So I got my £30 of petrol and drove home with a lighter heart.
Once at home, I had a good hard look at the living room and changed some furniture around to accommodate the coffee table more attractively.  Now it is set diagonally in the corner which really works and shows off the more interesting side really well.  I am happy with it where it is now.  It also helped to finally sort out some long standing clutter and get the gopak table folded up and in the shed - it's been out way too long.
Then the cleaners came, worked their weekly magic and left after admiring the table.  :-)
That was it really.
So - today.  I plan a me day with just a few chores.  There's one load of washing to dry and iron and then I want to get my old trainers washed (fingers crossed).
I'm going to wash my hair, not that that's anything special, and then give my nails a doing.  I've only just started giving them any attention or wearing varnish, etc, but I'm liking it so hope to make it a weekly thing.  Don't get me wrong, I always keep them clean, obviously, and neat but not polished and shiny.
Then I have some new magazines to snuggle into and some telly to catch up with and I might dig out a counted cross stitch kit to start.  And if I feel chilly, I will turn up the heating without any guilty pangs.  It's going to be that sort of day.
And look . . . the first apple from the flamenco ballerina tree. 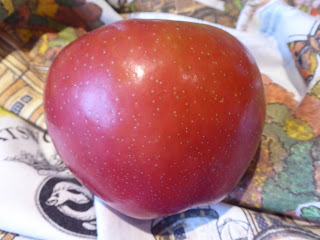