Good morning, everyone.  It was a chilly day yesterday and, keeping the heating down prior to Matt's visit, it was a three clothing layer morning.  We didn't have rain until the afternoon and it's still raining now which is a pain as the allotment will be super-muddy again, bother it!

Looking ahead, via Beeb weather, it's not looking wonderful.  Not much sunshine and a few nights where temperatures fall below freezing.  That's going to sort out any early blossom, isn't it, like that on the cherry plum at the end of the allotment.  This happens almost every year; Beth can only remember one occasion when it actually got round to bearing fruit.
I'm wondering when I will next go down.  Possibly this afternoon, if the rain stops, just to get those broad beans sown but maybe tomorrow would be better.

Not to worry, the garden is starting to show a bit of colour as the larger bulbs bud and start to open. 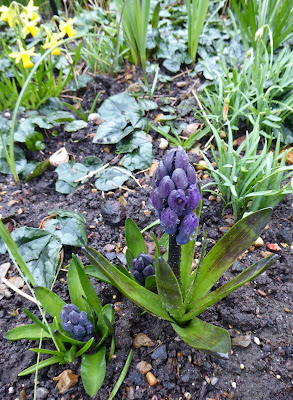 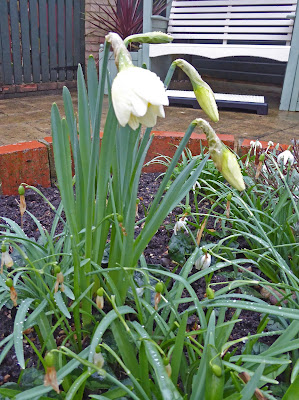 Matt turned up and an hour later I had fully functioning central heating again.  I can't remember if I said that the problem was that the radiators were staying on all the time. regardless of what boiler and thermostat dictated and I was extremely thankful that I had invested in individual thermostats for each radiator because that's how I've been controlling them for the past week or so.  It worked, it was OK, but a bit of a bore; remembering to turn them up each morning was dictated by how it felt but remembering to turn them down again was harder.  Goodness knows that the bill for heating will be like but never mind, all sorted now.

I was also concerned about boiler cover.  It's covered for several years but has to be serviced every year.  Because of Covid and Matt only doing emergencies for a while as his wife is extremely vulnerable, the service didn't get done last year.  However, he explained that the insurers had been in touch with him to say that providing a service was done and then another one later in the year as would be usual, it would be fine.  So I've had last year's done now and will have this year's at the usual time, around August/September time.  I'm glad I asked about it.

Later on in the day I had a good old chat with Val and we both looked forward to when we can meet face to face in the garden or park.  Won't that be great.

Today isn't too full - I have the Thursday chat with Chris and then nothing much until Zoom SW at half five.  However, I do have a house that needs attention so no excuses to be idle!  Have a great day, whatever the weather, and stay happy and positive. 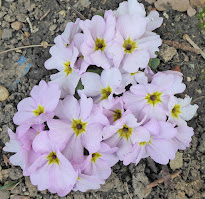