Good morning.  It's a bit early to tell what sort of a day it's started out to be but it's dry and it doesn't feel too cold.  That's fine by me.

I didn't have my chat with Jackie; she wasn't feeling all that well so we have rescheduled for Tuesday.  We're both looking forward to a face to face meeting the week after next.  That would be so very lovely.

It was brilliant down the allotment in the sunshine.  It was peaceful and there were very few others there - I would say around eight of us all found plus two who were having their daily exercise jogging round the perimeter (what a good idea).
I tackled the weeds - they never give up - and set up some more 'structure'. 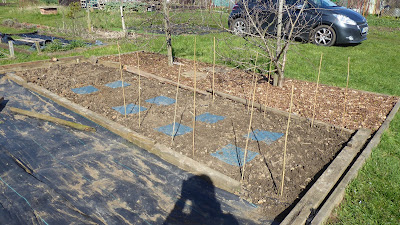 This is the front bed.  From right to left, there are three double rows marked by canes with squares between That's for the broad beans.  The first two double rows now have seeds sown (although a pesky cat had clawed up at least one bean that I could see.  Then there's a gap before the last pair of squares - that's for the tomato cage but there's no point setting that out yet, it might get nicked.  The remaining space, which is bigger than it looks at this angle, is for the baby corn, probably planted 5x5 or 6x6.  The canes aren't for the beans to grow up, they are just for support if it's windy and I will run twine around them in due course. 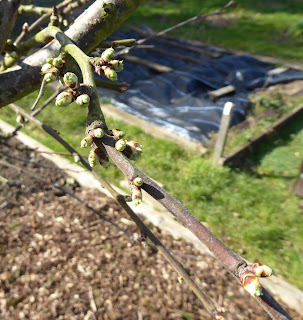 All the fruit trees now have buds.  This is the plum which, as mentioned before, is on its final warning!
There's also more rhubarb to pull which I forgot to photo.  I've looked on t'Internet and found a delicious recipe for rhubarb fool - totally evil as far as calories are concerned but definitely something Beth and Alex would love.
Then I came home, finished getting the house ready for the cleaners and had an online chat/meeting with Leonie, who is my Thermomix consultant (I think that's what they call them) about a new Thermomix addition called a Friend.  I've decided to get one (it works alongside the main Thermomix) but need to wait for a little while because they won't be selling the base on its own until April.  As I already have two bowls, there's not way I want, need or have space for a third.  Not a problem.  Leonie will let me know as soon as it becomes available.
And the sun shone all day long.  Lovely.
Today is somewhat similar but without the chats.
First of all, I'm off down to Morrisons to get what I need for the rhubarb fool plus sundry other bits and bobs that have come to mind.
Then I will load up the car with the mower and get me down to the old allotment to give the grass a haircut and the edges a strim, not to mention the regular hoeing of any random weeds that dare to show their faces.  Must remember to pull the rhubarb before I come home.
After that, the day's my own.  I'm going to spend some of it sorting out some of my garden pots and getting some compost from the bin onto the veg bed.  I might also pop a few of the pansies into the little front strip too.
Then I want to sow some broad beans in pots, to act as spares for any spaces where they don't germinate.  The soil is definitely getting warmer so I'm hoping there will be signs of growth soon.  I'm itching to get the tomatoes sown too but am wondering if it's a bit early as they will have to go straight outside when ready.  No half way greenhouses on the estate!
After that, I expect I will be glad of a sit down and snooze!
What do you plan to do today?  xx