In between bouts of feeling hotty-cold and giddy, I actually managed to get quite a lot done yesterday.

I made the pigs in blankets, all twelve of them and they look more than we will need but then - you know, leftovers - and used the other six chipolatas to make sausage rolls with some bits of puff pastry from the freezer.  I added a bit of cajun spice to the sausage meat but nothing else as they are, I mean were, good quality sausages and managed to make eleven without feeling I was being stingy with the filling.  That's more than enough!
Then I dug out the packet of stuffing.  Yes, I have made stuffing from scratch before but, honestly, I really don't think it's worth it.  I got a Sainsbury's Finest sage and onion stuffing mix and when I had made it up it smelled really sage-and-onion-y.  To half, I did what my mum always did and added some re-chopped chopped pork and a handful of dried cranberries before spooning it into a greased ovenproof dish and topping with the bits of bacon I didn't use for the pigs.

To the other half I added cranberries and melted in some butter.  Half of that is the vegetarian stuffing for Beth and the other half is for dinner tomorrow when I have a visitor or two (I hope).
The Christmas bits are now snuggled in the freezer and crossed off my list.  Cheers

I was shattered after that, snowflake that I am, and was very thankful that the dishwasher dealt competently with the mess.  I was equally thankful for the washing machine that sorted put my heap of whites, including much needed hankies.  There's a lot to regret in the passing of old customs and habits but washing by hand is definitely not one of them.

In the afternoon, I felt well enough to get the boxes of Christmas stuff from the garage and, bit by bit, out they came.
The new tree is now up and festooned with lights.  I thought it would be easier than the old tree and, to be fair, I suppose it was easier but it took longer.  It looks really nice now although the photo doesn't do it justice.  The decorations will go on next weekend on Christmas Tree day 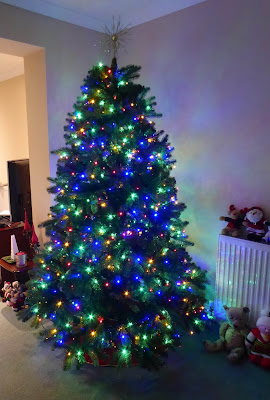 The Guardians of the Christmas Tree took their rightful place.  The bear on the left is Tubbalina and she's nearly as old as me.  The other is my brother's, three years younger.  Mary Christmas keeps them both in order, you understand!
One of these days I might ask the Repair Shop to consider Tubbalina for a makeover - she's so battered but she still has her voice. 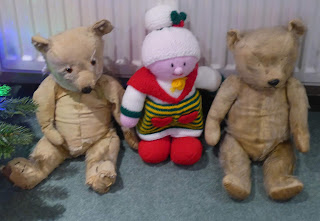 And the other toys are keeping warm on the radiator.  If I make any more mice, that's where they will go.

I'm up desperately early.  I woke, coughing, and once that had sorted out, couldn't get back to sleep again so I've come down for a warm drink and a bit of conversation!  I'll go back up once sleep returns.

Later on, I have a bit of shopping and a lot of tidying to do and then Beth is bringing a little friend over for dinner tonight.


Today's music goes back a long way.  Victoria's version of O Magnum Mysterium, just the sort of music I loved to sing as a teen/young adult.  The harmonies are amazing.

Translation
O great mystery and wonderful sacrament, that beasts should see the new-born Lord
lying in a manger. O blessed virgin, whose body was worthy to bear the Lord Jesus Christ.
Alleluia
Posted by Joy at 03:06