Morning, everyone.   Well, I was very wrong about no frost yesterday morning - as dawn broke, it got colder and colder and we did have the first frost of the season.  Sunshine and frost is so beautiful, isn't it?
And the sunshine lasted all day - a lovely, colourful autumnal day.
It's frosty again this morning.  It's what I remember most as a child - bonfire night in the back garden with cold fingers and toes from the frosty weather and Mum's sausages and jacket potatoes to warm us up.

Well, my plans went a bit awry yesterday.  I'd planned to do an early shop and be home in time for breakfast (which I have at eleven, usually) and then I would have time to wash my hair before Sharon arrived.  I got a message from her saying someone had to cancel (the dreaded Covid - lucky for Sharon that she found out before the appointment really) so could she do me earlier.
No problem, I just swapped shopping and hair appointment round, Sharon came and worked her usual magic on my aging locks and then I set off for the Riverside precinct.

I had a lovely time wandering around HomeSense and was sorely tempted.  I did succumb to a few things.  One was a owly Christmas mug - well, I say 'mug' but it's half a litre capacity so will be brilliant for soups, etc.  I think it's rather nice.  I also treated myself to a snow globe - a musical one too!  They really do seem to be a thing at present and this one is not too lavish - just a little winter scene with not a Santa or a deer in sight.  The last thing was a clementine spice reed diffuser which should last all through December.

Then I tackled Matalan and ooops!  Actually I'm really pleased with what I got.
First of all, I fell hard for some bedding.  It's more winter than specifically Christmas which is nice because I can start using it at the beginning of December.  It's not garish in any way and I  really, really like it . . . 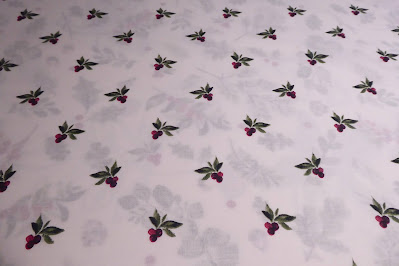 The reverse pattern (the shadows are the other side. 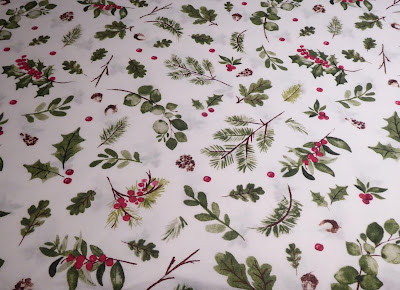 And this is the front.
For a double duvet cover and two pillow cases, it was remarkably cheap so it would be unlikely to last long, should I use it all the time, but just for a couple of winter months each year, it's fine.
I washed and ironed it when I got home and discovered that there was about a three inch gap along one of the seams.  Nothing a needle and thread didn't solve and, at the price I paid, I can't complain. 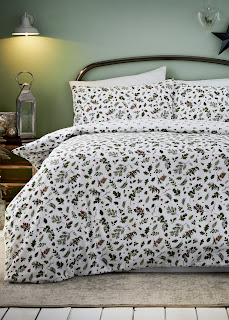 Here's the photo of it on the web site.  I just really like it.
Then I got some tops.
I need some longer tops to wear with my leggings and jeggings so my bum is covered and these should do the trick.  I've tried them on and all three are just right.  Happy!
They also had a very, very cute robin door-stop.  I usually use an owl one but he can share the responsibility with robin now.
All in all, I thought that was a very successful outing.  Or unsuccessful, depending on point of view!

Back home again, I got out the ironing board and iron and now I have an empty ironing basket.  It's just a shame there's another load waiting to be washed today but that's life!
Today ought to be Personal Training but we have rescheduled it for Friday afternoon instead.  That means I have a totally free day so, as tomorrow is rather busy, I will do my weekly food shop today instead of tomorrow.
There's housework to get on with and I'd really like to sort out the cupboard in the bathroom, if possible.
Are you sorting anything out today?  :-)