Good morning, one and all!   We seem to have had a jolly cold night but, as far as I can tell, there haven't been anything like the terrible winds they have had further north.  I do hope everyone is OK and that there hasn't been any damage where you are.
Today we are forecast to have sleet showers and a 'fresh breeze' which probably means just rain round here.  We did have a bit of snow overnight - I went along to the loo and peeped out, as usual, and there was just a little bit of snow settling but it seems to have gone now.

Yesterday was definitely a Good Day, despite the cold weather.

I meandered along to the Slimming World meeting where I did my usual thing of manning the scales.  My own results were great so I was extremely happy and lots of others had lost a few pounds as well; it's lovely to see people so pleased.
The actual group part was also really cheerful and jolly.  So nice.
The raffle was something I have been looking for in vain - a bottle of Vimto Winter Warmer which is a lovely spiced dilutable drink that one is supposed to have hot.  I've been looking for it everywhere!  I asked Jen and she said Asda, not a shop I usually use as it's further away than any of the others.  After meeting I drove over and yes!!  Now I have my supply of Winter Warmer drink.

I also have yet another Christmas top but this one is a long top, almost down to my knees.  It looks really good over leggings and, I guess, thick black tights (I think I have some).  It's plain black with sparkly stars across the top, not gaudy at all but, I think, really nice.  No, I don't need another top but . . .
I Googled and found this photo.  I think it's nicer than it shows here and it looks longer on shorter me but you get the idea. 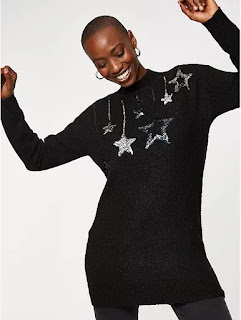 I also found some red, spicy scented candles for my candle sticks.  I have a feeling I'm going to get through a lot of candles this Christmas.  Now, where did I put my candle snuffer?

In the excitement of all that, I totally forgot I had been intending to attend a Goldster class but never mind.  I did try to get in very late, just for a taster, but couldn't get in.  Fair enough, it must have been close to finishing.

My minarette fruit trees have arrived!  Well, two of them, the Braeburn and the Victoria plum - the third is arriving in the next few days.
I braved the cold and planted them in their pots and then, later on, while idly reading the leaflet that came with them, realised I'd done it a bit wrong so today I need to go out and make adjustments.  Poor little trees, arriving just as a cold snap starts.  I will pop them in a sheltered corner and might tie some bubblewrap around them.

The one that's coming is a pear called 'Beth'.  If you remember, I said earlier in the year that I absolutely HAD to buy that, just for the name!  I'm very much looking forward to seeing how they do after this year's success with the Flamenco apple.  Only seven fruit but they were a bonus in the first year and each apple was an absolute delight to eat!

The rest of the day was spent in household pottering with a bit of a celebration of my good results at SW (silly, I know, but . . .).  I started Beth's Christmas cardigan and finished the Christmas gifts I was making.

Today is more of the same really.  Fingers crossed I remember the Goldster class today.   I have to freeze to death as I sort out the muddle I have made planting the little trees, I'm hoping the pear will arrive so I can plant that and I want to get on with some meal planning.  Oh, and there's a couple of loads of washing to deal with too.  And knitting.  Always knitting.

What's it like your way?  Have you had snow and/or high winds?  However it is, take great care, stay warm and safe and have a lovely day.  xx