Good morning, all.  After a gorgeously sunny day yesterday, it's been raining this morning although it's clearing now and looks more promising than the forecast would indicate.

Yesterday was a funny old day.  I forced myself down to the dentist after the milk run was over and got myself an appointment.  It's not until next Thursday afternoon as it's a busy practice (which is reassuring) and it's not an emergency.  I'm not in pain or anything, thankfully, just getting a twinge now and again.  I've got the bridge that fell off but it's very old, well over twenty five years old, and I think bits have broken so it's not as simple as just sticking it back in.  And there's the other three teeth to deal with as well so I really am going to have to woman-up and face the music.  Aaaaarrrrgggghhhhh!!!

Thanks for all your comments.  It helps to know I'm not the only one with an absolute dread of all things dental.

By the time I got home, I was in a bit of a wobble but things had to be done before I went off to training with Lindsey, so I had no time for a 'poor old me' session, thankfully.
After PT, Beth was round and we had a prep session for the Kitty Stitches Open House on Sunday.  She made cards and I made biscotti!
We also made an almighty mess! 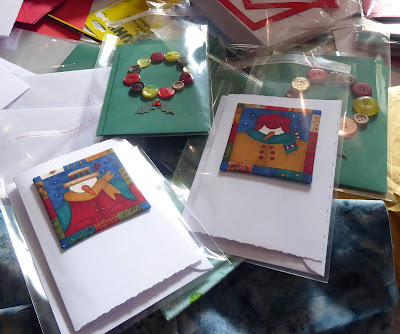 If you're interested in coming, do get in touch via comments and I can give you the details.

Then it was off to Governors' Meeting.  It was a good one this time, interesting enough that I didn't need to fight to stay awake.

However, I don't think it's just the dental tension, I'm feeling a bit achey and around 90% so I'm taking it easy today.  I've cancelled the Aqua class I was booked into and I'm just going to potter around until tuition when I ought to be feeling a lot better again.
I do hope so because I'm not missing pottery again!