Good morning.  Guess what - it's dull and damp and not cold, just like yesterday and the day before and . . .
I hear rumours that there's cold weather a-coming.  I'll believe that when I see it though!

Yesterday, everything worked out really well.
I picked up my prescription after having a blood test at the hospital, arranged for a blood pressure check and had a work with the receptionist about preferred method of contact.  They keep trying to phone me and I have told them on more than one occasion that I don't answer the phone (hearing issues).  They've got it nice and clear on my records but . . .  Anyway, she was very nice and is taking some action.  We will see if it improves matters.

Then it was home for breakfast, shortly after which I set off for the bus to go to Riverside for the organised walk.  It was damp and drizzly but, all the same, so nice to get out again after a week indoors feeling not great.

Then it was school.  I do my usual thing of marking their 'homework' and getting the new sheets into their files.  This year the teacher has changed the system and now it's a whole load easier to do which is nice (for me).

Then it was on to tuition.  The planning was all done last week so it was a question of turning up and delivering, which went fine.

And that was more or less it.  I helped Beth with some bunting she is making for a customer and did some knitting.  I'm half way through the mince pie seller.  This photo isn't mine, it's cropped from the pattern cover but, apart from some colour differences, mine should look more or less the same. 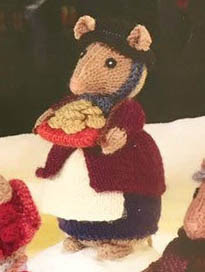 Sewing those tiny little pies to the tray was just about the fiddliest thing I have ever done!

Today is much easier.  There's nothing planned until tuition but plenty to do.  Housework, for a start.  Then knitting and I want to make the time to get out some of my air dry clay and get on with some ornaments for my bedroom tree.  If they look nice, I'll take a photo!

Have a lovely day, whatever you have planned.  xx
Posted by Joy at 07:52