Good morning, everyone.  It's cold and dry out there and I'm quite relieved that I don't need to go out until later because I find that I do feel the cold a lot more since losing a lot of my inner insulation!!

Pottery yesterday was good.  She started us two beginners on slab pottery and thought that the Swiss cheese plant leaf would be worth a go so I had a go.

By the end of the session I had this. 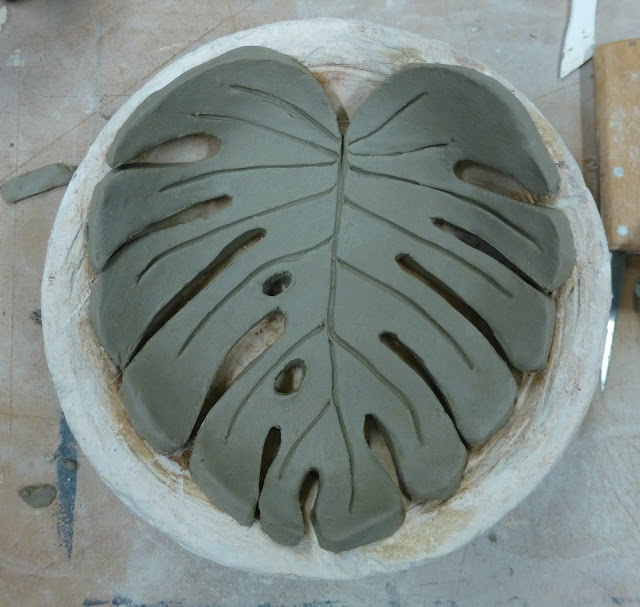 As you can see, it's lying in a bowl mould to curve it up and once it's dried, it will need smoothing off and generally neatening up before firing.
For a first go, I think it will look OK and I loved doing it.

Less happily, I went online to book the course for next term and all the places were already taken.  That was so disappointing and I was more than a bit gutted.  I should have booked after last week when there were still places.  Then I decided to do a Pollyanna and make the best of it.  I went back into the site to see what other crafts they had on offer.  Surely there would be something?  Advanced Knitting?  Crochet for the Cack-Handed?  Sewing for the Elderly?

Guess what!  They also do an evening pottery course and, joy of joys, there were still places.  There's one less now as I booked right away.  OK, it's Thursday evenings, it's not the same group of people and I will have to swap my Swimming World group to the Wednesday group on those evenings but it's nothing that can't be organised.  And next time, I will book as soon as possible without any ifs, buts or maybes.

I'm so glad I looked.

Today I am meeting a lovely friend for coffee and a chat and then there's nothing much until tuition.  The evening is taken up with a Governors' Meeting so it's just as well I'm feeling a bit better, isn't it?

Have a great day, whatever you have planned.
xx
Posted by Joy at 06:25