Good morning!  It's chilly but not freezing, a slippers and dressing gown morning but not a turn up the heating morning.  I daresay we'll have a few of them in the next week or so and I am grateful for small mercies!

I set off for the new class good and early and I'm glad I did because when I got there the car park was chokka to the extent that I came out of it and tried to find parking on the road.  The centre is in the grounds of a school so there is restricted parking all round and I had to park about five minutes' walk away.  Not a bad thing as I'm always looking for reasons to walk but if I'd not allowed plenty of time, I'd have been late.
And when I got there finally, there was a notice saying to inform reception if you had douible parked, so I could have done that and saved myself the time.  Never mind, I know now.

Although the title is 'pottery for beginners', it's an established group and there were only three newbies.  One already had some experience and she got herself organised straight away.  The other lady had done some pottery in the past but had forgotten most of it so we were introduced to everything, shown how to make a couple of pinch pots and join them together to make a hollow sphere and then to do it again because our first efforts were - interesting!!
At first I fancied turning mine into an owl but then the tutor found the hedgehog insturctions so I went for that instead.
It was very absorbing and the time just flew by!
This is a photo of part of a photocopy of the set of instructions, hence the lousy quality, and my hedgehog doesn't look quite like this one but I tried.  It's got to dry now and then I'm not sure what happens.  I'll learn that next week. 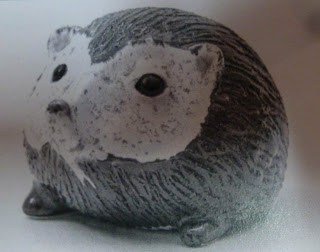 The others were nioce.  It was already an established group and I was lucky to get a place, but there was no cliquiness; everyone was very friendly and helpful and there was some lovely work out.
I am looking forward to next week and seriously considering signing up for the next one quickly!  After all, it's not really the sort of thing one can do easily at home.

Wen I got home, Beth was here so we had lunch and a good chat before she carried on with her work and I settled to check my emails.  One of them contained some news that made me very, very happy.   I can't say what it was because of confidentiality but it's something a friend and I (and others) have been working for for years and it is just brilliant!

Tuition was also great and after that I was able to settle down for the evening.

I thought today was easier but I've just checked my diary and it's just as well I did because I am out to lunch with a friend.  It's also just as well that I have plenty of work prepared for tuition this evening, isn't it?  I want to go swimming first thing so it's all go!

I'd better stop now and get going.  Have a lovely day, whatever you have planned!