Good morning!
Werll, we did get some snow yesterday evening.  By about 21:00 it was quite heavy but it wasn't really cold enough to settle properly and there's just a little lying this morning.  Encough to inspire dreams of fights and snowmen in young brains but nowhere near enough for a snowday in which to have the time!
Not a great photo, taken lateish yesterday evening . . . 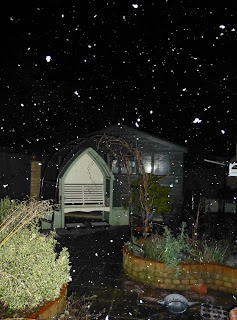 Yesterday was lovely.
At pottery I did two things - I made my first attempts at glazing and I carried on with the leaf.

The hedgehog was fired over the week so was ready for the next stage.  Unfortunately, that particular skill involves being artistic - this one did anyway - so I felt it was a bit of a failure - more than a bit, in fact.  It's easy to see what I should have done, not so easy to actually do it.  So now it looks more like a mousehog.

Glaze is funny - it looks nothing like how it will come out of the kiln.  This is supposed to be an oatmeal face and a body called 'muddy waters'.    I wasn't going to post a photo here but I will - for better or worse as the phrase goes.  The face should have been much rounder but never mind - first efforts and all that.  Let's but it this way - the tutor was polite and I laughed! 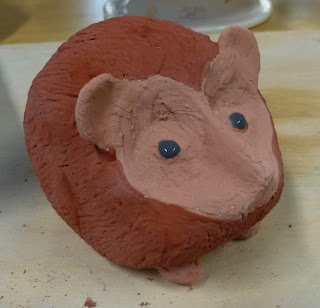 No need to be reassuring - I think it will be cute, if unrecognisable, but a hedgehog it ain't!

What took most of the time was smoothing off the leaf.  It took ages because I wanted to do as good a job as I am capable of and I was assured that glazing will sort the rest out.  I've found a lovely glaze called 'oriental blue' which is actually a bluey green and is just what I had in mind.  It will all be the one colour so no need to try to be artistic and I think that generally I will do monotone stuff and rely on the variations within the glazes for patterning.  For now, anyway.
It's now in the kiln and I think it is going to be very satisfying when it's finished.  Reassuringly, the tutor was extremely enthusiastic and complimentary about it so I really hope it doesn't break during firing. 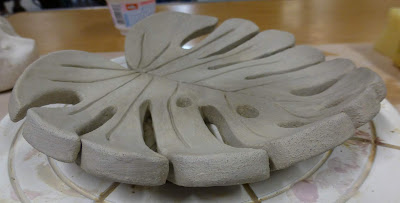 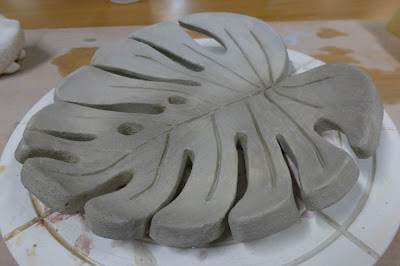 Next week I glaze first and then she is going to teach us how to make coil pottery so I need to do some looking around to see what I would like to have a go at.  I found some photos but they look hard.  Maybe I should get some air drying clay to practise at home.

Then I want to make a plate/bowl with relief pottery round the edge - or maybe a set.  I rather fancy the theme of 'seasons' with, for example, holly and ivy around the 'winter' plate, apple blossom around 'spring', and autumn leaves and fruit around one, all in relief  Not sure about Summer but I will think - maybe daisies, roses, butterflies and a ladybird?  That should develop a few skills!  Thank goodness for youtube.

Goodness - how I have rabbited on.  Sorry!

Tuition was cancelled because my student was unwell so the rest of the day was very easy.  I made a scrummy lunch . . . 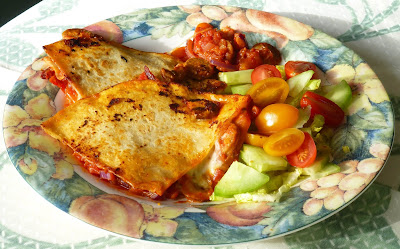 Today I have an empty page in my diary until tuition so will maybe wander into town on the bus if the weather permits although right now this doesn't feel such a good idea so maybe not!.  Or maybe I will do some sorting out at home - I have a small spare bedroom that I have to clear in the next month or so and that sounds a much more likely occupation.  I have to look over the planning too, of course.