Good morning everyone.  It's proper cold this morning; there's an icy wind and I was glad to shut the door quickly after getting out the recycling stuff for collection today.  I'm really glad I found that warmer coat the other day.

Well, yesterday turned out to be another busy but very satisfying day.

I had my swim and it was good.  I think I've found the best time to go which is not when it opens at six-thirty, it's around eight.  I guess the workers have to be off to work and the mums are getting their children off to school so it is just us golden oldies.  They've sorted out the problem with the pool that stopped me going after my holiday to Center Parcs (it was just a degree or so too cold) and it is now easy to get in and start swimming withough shivering.  The spa is lovely and warm afterwards too.

Then I came home to a message from the friend I was meeting with for lunch to say her other half was full of cold so she could come to me rather than the other way round.  She did and we popped out to The Hare for lunch.  I had the soup which was a simply delicious curried cauliflower soup; later on I hunted for the recipe and I'll give it a go next week at some point.

I thought I'd be a good girl and do a bit of looking around for ideas for pottery.  After all, I have a sketchbook/portfolio sort of thing to fill.  I found some lovely ideas and I'll add two of my favourites so far in here.  They look easier than I expect they are.

I'd love to make some sets of buttons and could use them on my other crafting - on a quilted bag, for example, or on a cushion cover.
I also had the thought that a pendant on a leather 'string' would be rather satisfying too. 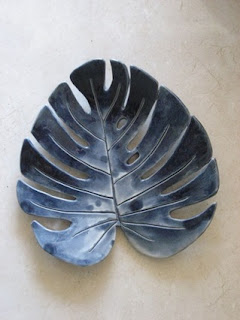 I simply love this one - it's gorgeous.

Tuition was, as almost always, good fun.
All in all, a super day.

Today should be less rushed.  I'm off to Morrisons first thing (walking so I hope I don't turn into an icicle) and then off to see a friend who had an op last week and is now OK to have visitors.  That's the reason I'm shopping - flowers and fruit (not chocs as she's a fellow Slimming-Worlder) should be just the ticket, if highly unoriginal.

Then the day's my own so I can catch up with some ironing before a spot of tuition and finally off to SW group.  My fingers are crossed for that one.

So it's just a pleasant, semi-busy day without too much pressure.  Perfick!  I hope yours is too.
xx