Good morning, everyone, and welcome to Tuesday.

I was so tired yesterday evening, I gave in and went to bed at eight thirty and I don't even remember waiting to fall asleep!  I woke at five (with just the usual loo breaks) so that's over eight hours of good sleep.  I feel so much better this morning!

It's looking promising out there and, indeed, the forecast looks great for the rest of the week and the weekend too.  Woo hoo!

I had a good journey home from Dad's.  It was raining and there was a lot of surface water, not to mention quite a lot of heavy lorries and farm vehicles making local journeys, so it took a bit longer than expected, but it was fine.

When I arrived home, the first thing I did after bringing in the cases was look at the garden and looky look! 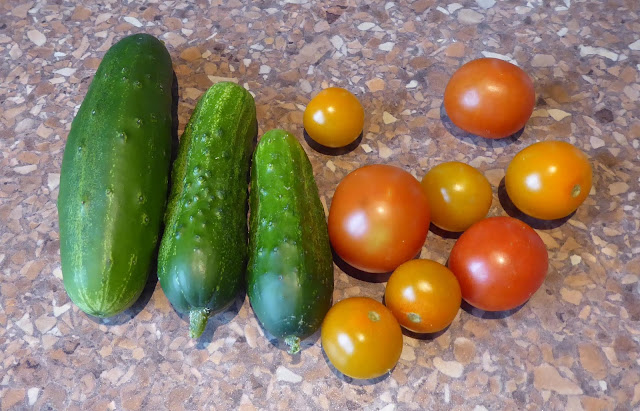 There are three more mini cucumbers nearly ready and several more tomatoes are ripening.  They are on their way now!

The rest of the day was spent sorting things out, planning for today's tuition, catching up on some telly and so on.  Nice, normal, homey stuff.

Today is a little busier.
First of all, there's a bit of tuition, then Christine is coming round (weather permitting) for a chat and then I'm off to Beth's for an hour to take something round and have another chat.  Maybe, later on, I'll take a trip to the allotment to see how  things are going there.  It won't need watering, that's for sure, but there might be a few courgettes!

I do have some washing but I think I'll leave it for a few days as it's not quite enough for two loads (I do do darks and lights separately).  Thursday looks a pretty empty day so I guess I'll do it then.
It should be a good day and I hope yours is too.  Stay safe.  xx