Good morning!
After giving the new Blogger a try, I've gone back to the old one.  I really liked some features - for example, they have made it really difficult to post a 'saved' entry accidentally - but the inserting images function is slow and clunky and how anyone could imagine it is an improvement on the old way is beyond me.  As I sometimes insert a fair number of images, it really got up my nose!

At least I gave it a fair go.

We had some beautiful weather yesterday.  It clouded over later on in the afternoon and I gather storms were forecast but it didn't feel particularly humid round here and the skies cleared again without any rain or noise!
At the moment, the sun is out and it looks gorgeous.  The forecast keeps changing; at the moment it says light rain mid afternoon but that could easily change.  I've watered the garden anyway and done some side shooting!

Some days just seem to merge into each other, don't they, and one can have difficulty remembering the specifics (or am I just getting old).  I've had to think quite hard about yesterday which is daft but I got there eventually.

Because it was so sunny, I started off some washing and managed to get it all done and line dried.  Now I have a pile of ironing which, I guess, is on today's list of Things To Do.
I popped down to the allotment and planted out the remaining runner beans, grown in pots, to fill the gaps (and did the same thing at home as well).  After those initial worries, they seem to be doing OK, maybe a bit later than some other plots but they will catch up.  They always do.
I also found gaps for the remaining tomato plants, all but two.  Those two are now in the compost bin as no-one around here wanted any more.  I also planted out the last squash to replace the one that does so fingers crossed.  Now I just have the chillies to plant out and I'll do that today and then that's the end of the seedling veg.  All done and dusted.
The allotment continues to look potentially productive. 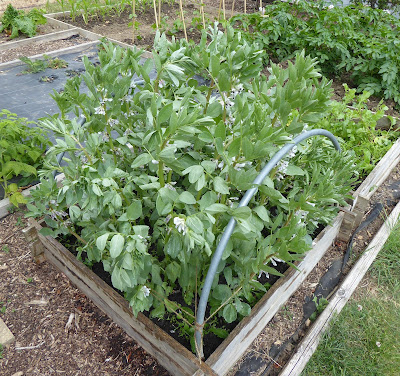 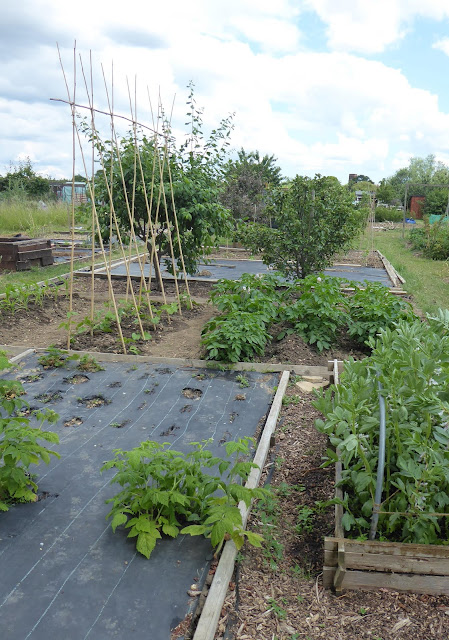 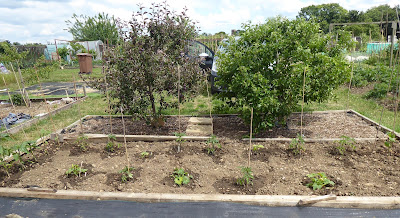 Tomatoes, courgettes and squashes at the front.

I took some rhubarb round to Julia and was going to take some round to Dave (son) too but he suggested he come round for a chat after work.  He did and it was really lovely, a great treat as he's a busy chap and I don't see all that much of him, considering how nearby he lives.

Oh, I nearly forgot - I had some camping chairs delivered.  On Saturday I discovered that the seat of one of my camping chairs has started splitting (they are very old) so I decided it was best to replace them before someone came to grief in one.  I ordered some on Sunday (Amazon) and they arrived yesterday which is amazingly fast.  I'm very pleased - they are padded and comfortable and the back is slightly higher than the old ones so more supportive. 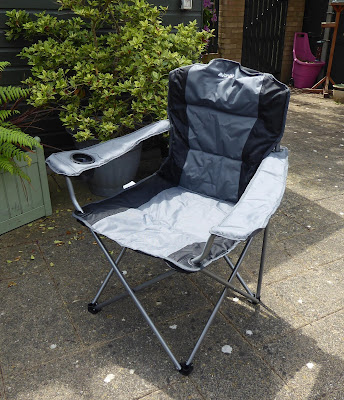 The only thing in the diary for today is the SW Zoom meeting this morning (pound and a half off - yay) and I need to check whether Beth will do the watering today.  I have a basket of ironing to deal with, the chilli plants to put into the relevant bed and I need to go to Morrisons at some point but apart from that it is just normal, housework-y things.
In other words, a gentle day!

You have a good one too.  xx

(I've discovered an annoying change to the old Blogger - since yesterday, I think.  You used to be able to choose your photos and Blogger 'held' them in the 'insert images' 'area' until you double clicked.  Now it doesn't hold them beyond the initial selection.  Grrrrr)