Good morning, everyone.  The early sun is shining brightly in a clear, blue sky at the moment but, brrr, it's chilly.  The forecast for the morning looks positive but, by twelve, showers are predicted.  Rather like yesterday by the looks of it but with more sun, hopefully.
Yesterday we had slight showers on and off through the day with a couple of harder spells, one of which decided to make its presence felt while I was down the allotment!  Can't complain; at least I didn't need to water and even before it started the ground felt pleasantly damp so weeding was easy.
Everything's coming on nicely (including the bindweed and ground elder, darn them).  I weeded around the baby corn and the runner beans, the courgettes, tomatoes, baby cucumbers, etc, but left around the soft fruit and the chipped areas for another day.
Some photos (and you can see how dull it was) - plenty of . . . 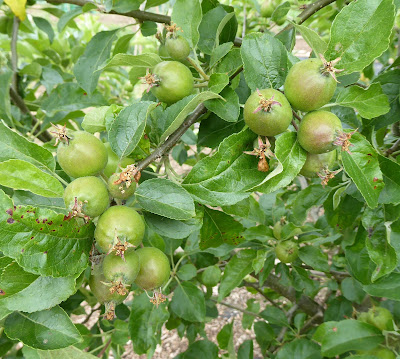 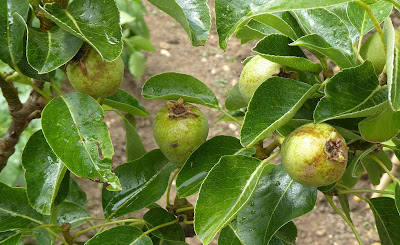 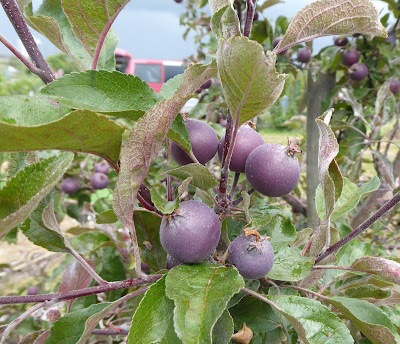 more apples.
The June drop hasn't started yet so they will naturally thin out over the month but I think the baby fruit looks so cute!
No plums though, as far as I can see. 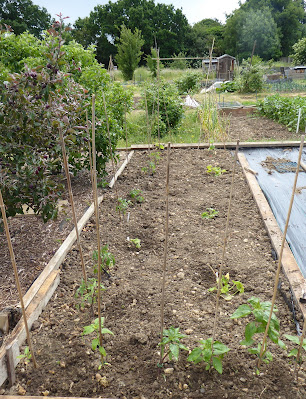 Taken from one side, it doesn't look much here but there's plenty.  Three yellow courgettes, two squashes (we hope; they're not doing all that well right now), a row of sunflowers at the front of the photo, two gherkins at the back and a row of tomato plants along the left side (left in the photo, that is).  Give them time and they will look great. 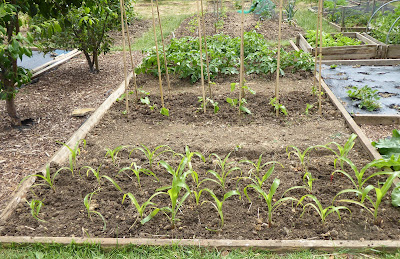 Still taken from the side, here we have the baby corn which has just decided it may as well make the best of things and start growing properly.   Behind that are the runner beans and now I've taken away the anti pigeon protection, it's clear that they're doing OK.  There's two gaps and I can plug them with the ones that are still growing in pots.  Then there's the potatoes - Charlottes - which are starting to flower - yay! 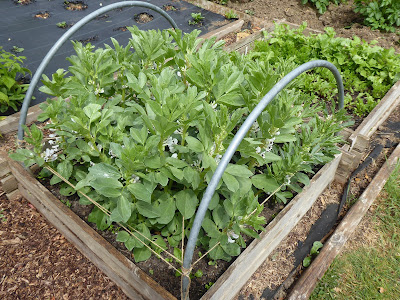 The broad beans and, behind them, the radishes, carrots and beetroots.
There are definitely some wee baby bean pods now and no blackfly - I hope that's not famous last words! 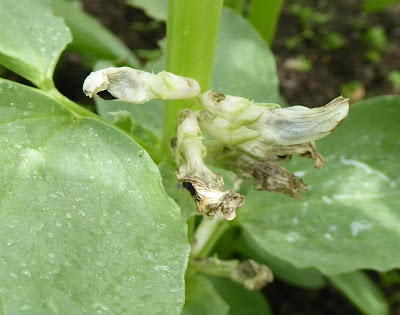 Not that clear, sorry. 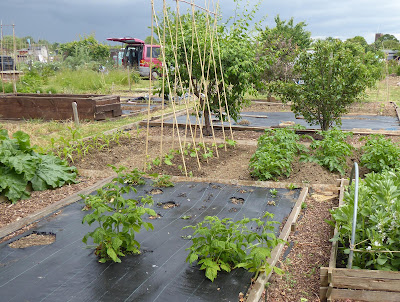 A general view from the back.
The Shows Must Go On showing of a Peter Pan show had been cancelled to mark this weeks sad and worrying events in America and I spend a time just sort of wondering and thinking.  Inadequate but it's all I can do really.
The nicest thing about yesterday was the arrival of some parcels.  I was expecting some kitchen scales as mine went on me on Thursday and, as I use them such a lot, a working set was rather needed.
So the first parcel arrived and it was obviously not the scales.  Instead, it was the other pyrex bowls with lids, earlier than expected but no complaints from me.  Then the second parcel arrived which turned out to be an order I made from Lakeland, some ice lolly moulds.  Also earlier than expected.
Finally, there were the scales which are great and work perfectly!
Another 'nicest thing' was coming back from the allotment to a lovely clean house.  I love my cleaners!!
Today there's nothing in the diary.  I might do some mowing and strimming down the allotment but it's more likely I will do it tomorrow when I meet Beth down there for coffee, a chat and, yes, some gardening as well.
I'm going to do a small early morning shop for just a few bits and bobs.
And I have to check the tomatoes for side shoots, scrape round some of the slabs to get rid of weeds and the bird feeder needs a bit of a clean.
And talking of birds - a female blackbird has discovered the strawberry bed.  How I've got away with it for so long I have no idea but action will now need to be taken as word gets around.
I've not been all that happy with this year's crop anyway and reckon most of the plants are now really too old and need to be replaced.  I will 'take' some runners when they start throwing them out but I also think I shall search around the online garden centres for some new plants, some that have big juicy berries rather than the little ones.  I'll dig over and enrich the entire bed (not too difficult a job) and must have a good think about some form of protective cover for next year.  It doesn't have to be particularly high, just keep the birds off while not making it difficult for me to pick them.  Any ideas?
Time to get the day started.  The sun is still shining and the wind has picked up.  It's lovely out there as long as I'm the warmer side of the window!
Enjoy your day and be safe.  xx
Posted by Joy at 06:40