Good morning.  It was another day of two halves yesterday with lashing rain and strong winds before the sun finally emerged and a mild, almost spring-like afternoon that cheered me up no end.  However, today looks dire again!  Come on, Spring - it's nearly March now! 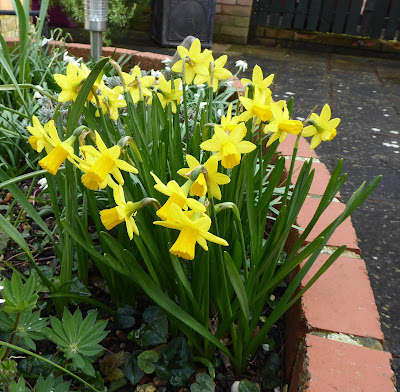 Some of the mini-daffs in the garden yesterday pm - they're putting on a lovely show this year!


It took me ages to pin and cut out the pattern.  The fabric I used was, I realised, some I bought before I moved here around thirty five years ago and it is metre wide fabric, meaning that some of the pattern pieces are too wide to place on the fold, so to speak, as it is kimono style.  Fortunately, I have loads of the fabric, as I originally intended it for a dress (I still have the pattern!!) so there's enough and to spare and maybe enough also for a summer top.
I have a feeling it was seconds as I had to avoid a few faults in the printing.

Being an old skinflint, I didn't want to limit the paper pattern to just my size - I applaud the fact that nowadays paper patterns are multi sized - so there was a certain amount of careful snipping in and folding around neck and underarm which I did very carefully, being out of practise.  I definitely go along with the saying 'think thrice and cut once'.

I'm still undecided as to whether to bind or to create facings.  There's plenty of fabric left.  Decisions, decisions!

Today is an INSET day at school so I'm having my two brother pupils for tuition this morning first thing.  They are early risers too and it suits us all to do Monday morning.  It will free me up at tea time and also tomorrow after school so works well all round.

Then I need to hop in the car and go to Aldi for some shopping and then on to Hobbycraft for some sylko - although it's not called that nowadays, is it - and I might also get some iron on interfacing, just in case I make facings (which I will have to decide fairly soon).   If I don't, it won't be wasted as Beth uses it for her machine applique as well.

This afternoon, I'll probably get the sewing maching down from upstairs, take a few deep breaths and start sewing!  Fingers crossed - wish me luck.  :-)
xx