Good morning.  No frost overnight here and it definitely feels - well, not warm, but less cold.  Beeb weather expect it to get up to mid teens today, sun this morning and dull this afternoon.  Fingers crossed.

Yesterday was quiet but very pleasant.  I got a load of washing done, dried and even ironed, made a batch of savoury mince, activated a starter and generally pottered around doing 'stuff'.

Beth did go to the allotment after all, doing a bit of weeding including around the broad beans and starting to tidy out the shed.  When I realised she was there, I whizzed down and we had a bit of a chat before agreeing on the time on Saturday.  It was flippin' cold there, with quite a breeze and the sun behind clouds.

I had an email from the lovely Sharon, my hairdresser, saying she's able to re-start at the beginning of July and offering an appointment for me and Beth in the second week.  Of course, I grabbed at it with cries of delights and now it is fingers crossed that it will indeed happen.  I confessed to my fringe chopping; she laughed and said lots of her clients have been 'hacking bits off'.  It sounds rather blood thirsty, doesn't it?

At last, at long, long last, a few little birds seem to have discovered my bird table.  It has literally been about a year since I put it up and the two local pigeons discovered it pretty quickly but little birds?  Nope, I saw not one.
I moved it further away from the house but that didn't help.
So, a short time ago, I moved it again, to under next door's tree and a week afterwards, when I opened my curtains one morning, there they were.  Just one or two tits, nothing more, but the very first that I have seen.
I'm still not getting many but a pair of blackbirds seem to have found it, plus the occasional tit and fingers crossed the word will now get round.
Where it is now makes it harder for the pigeons.  They still manage it but not nearly so often. 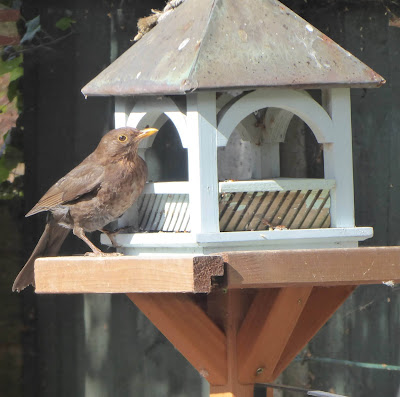 Don't laugh:  I seem to have thirty tomato plants plus, hopefully, the three sungolds that are due to arrive in the next few months.  Not bad for someone who was panicking about not having enough.  Beth said she will take some so they certainly won't be wasted.
Here's about a third of them - they have grown from the seeds I won in the SW raffle.  The bits of willow cane look much nicer than the luminous green ones you can buy.  I will keep them for next year! 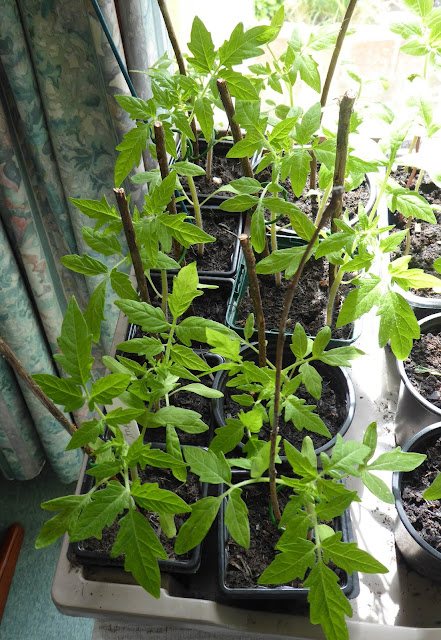 Today, Friday, is a bit busier.  I intend to go shopping at eight and, at some point later on in the day, take some stuff round to Beth plus veg from the veg box, delivered, hopefully, some time this morning.
At ten forty-five I have half an hour of PT with Lindsey.
When the cleaners arrive, I'm off to the allotment to mow and strim today instead of tomorrow.
And finally, I have a chat scheduled with Faith in the afternoon.

To put the cap on it, this weekend's online ALW offering is Cats.  Brilliant.  I'll try and catch it this evening although I find myself fighting to stay awake beyond around half past eight at the moment so might have to finish it tomorrow.