Good morning, everyone.  I gather today is the last day of nice weather before a change sets in.  The predicted rain will be most welcome to me (and the allotment/garden) but the lower temperatures won't.  Time for winter woollies again!

Do you remember that when I was sorting out my old seeds last week (or maybe the week before), I found some old gardener's delight tomato seeds and thought I may as well give them a go?  Well, today's bit of good news is that some of them are coming up.  That's a bonus as I nearly threw them away.
I can see that every spare nook and cranny will be filled with a tomato plant.  Definitely a Good Thing - can one ever have too many fresh tomatoes?  I say no!

It was delightful at the allotment yesterday.  I was the first to arrive so had to open the gate, gloves on and anti bac stuff in great evidence, before getting out the fork and working over some of the prepped ground.  Having done that, I tackled the side of the shed which was in an utterly disgraceful state with old and disintegrating pieces of wood mixed with garden canes and other unmentionable stuff.  I threw most of the (unusable) wood further back amidst the trees where it can quietly rot down over time, pulled up copious weeds of various kinds, sorted the canes into shorter, longer and medium and put them back more neatly where they are now easy to get and use.
The shed is a rickety old thing but it does save me having to take so much with me each time I go.   Anything valuable doesn't get left there, of course, but anyone who thinks our old tools are worth nicking must be bonkers!
One day, maybe, we will have a posh one, but it's not worth the money really.  I'd rather spend on better soil, raised beds, etc. 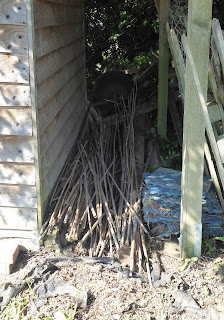 I know it doesn't look much, but it's so much better now than it was this time yesterday.

I watered (loadsa beans now), cut some rhubarb and took a few photos. 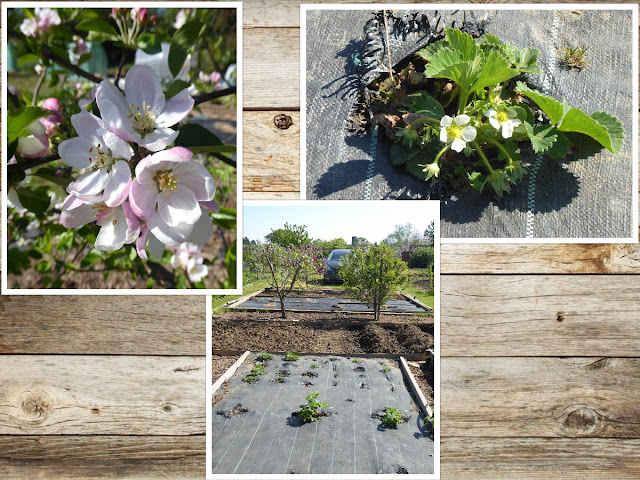 Then I came home, enjoyed breakfast and generally pottered around doing a few bits and bobs before settling into catching up with my ironing while I also caught up on some Mike Jeavons 'A week on . . .' things on YouTube.  He does make me smile; he has a very dry sense of humour.

A new week starts today.  I wonder what it will bring.

Something energetic:
As mentioned above, there seems to be a change of weather in the offing so, in case they are right, today I am lugging the mower down to the allotment to give the grass a good haircut because it doesn't do wet grass all that well and gets all clogged up and hard to clean.  The other thing on the list is weeding around the permanently covered areas that have bark chippings down.  Those pesky weeds will always find a way!

Something for house and garden:
I need to spend some time dealing with the ravages of the weekend before finishing off the ironing (I couldn't face the sheets and quilt covers yesterday) before settling down for the afternoon idleness.  I wonder if the tomatoes will arrive today.

Something social:
I will suggest a chat to Chris and see if she can make it.

Something creative:
I'm busy crocheting double knitting into strips of squares for a dolly's blanket.  I doubt it will get anywhere but it's keeping my hands busy and making a tiny little dent in the disgracefully large stash of yarn.

Something entertaining:
There's something that looks quite interesting on BBC4 this evening.  Called 'Museums in Quarantine', over the next four evenings art critics are 'exploring' (that's what it says) some of Britain's collections and exhibitions.
In case you're interested, tonight is the Andy Warhol exhibition at the Tate Modern, tomorrow it's about Rembrandt at the Ashmolean, Wednesday is about Tate Britain and Thursday is in the British Museum.  I'm going to set them to record, I think.

So that's today sorted.  I wonder how much I will actually get done.
Have a good day, whatever your plans are.  xx
Posted by Joy at 04:55