Good morning!  Wasn't yesterday a simply gorgeous day?  Warm and sunny with a gentle breeze.  I had both French windows open as wide as they would go and it was great to be able to let in the fresh air and not worry about losing the heat!

First of all - Viv, here's the fabric I have.  Could you use it? 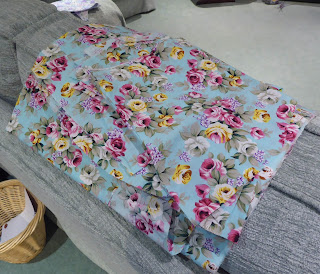 I pottered rather yesterday but still managed to get a reasonable amount done, albeit in a very leisurely way.

I got stuck into the algebra early and took it carefully but, so far, there's nothing in the content that baffled me although I did have to think hard (which is the main point of doing this - to get the old brain cells moving a bit) and today I will just read through yesterday's notes before moving on.

Pottering in the garden was delightful.  I dealt with a naughty dandelion that dared to show its sunny face above the bulb leaves and then got stuck into the strawberry patch.  There were some old plants that were on their last legs and not sending up new growth so I got them out, re-sited some that had rooted in the tomato area and popped the new ones in the gaps.  I know it doesn't look great yet but give them a fortnight or three weeks and there will be loads of leafage and maybe some flowers too.  And then next year, once the new ones have properly established, they will be lovely! 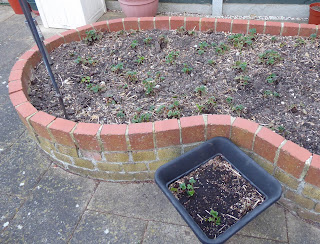 While I was cutting out and generally marking and tacking up, I watched the play 'One man: two guv'nors' and it was hilariously funny in some places.  I'm so glad I changed my mind and watched it.  Then (as it was the next thing up) I watched some of the concert performance of Les Mis and that was pretty amazing too.

This top pattern really is very quick and easy (apart from setting in the sleeve which is a pain).  I had some lovely bluey green fabric that was perfect and only just noticed in time that there was a fade line right down the middle, darn it.  I tried to get round it but it just wouldn't work so that went back in the cupboard to use for something else at some point.  It is a very, very old piece of fabric.

Instead, I used some extremely cheap stuff that I bought when I had just retired, mainly to practise patchwork/quilting on but it wasn't good enough for that.  However, it's perfect for a cheap, everyday, summer top so that's what I made, using the square neck this time (which is straight, it just looks slightly wonky in the photo).  I cut it longer this time.
(You're going to get fed up with these photos, sorry) 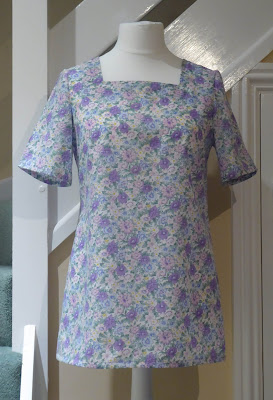 I looked at Joe's seniors workout but it was just rather too easy with no challenge in it so I'll stick with the PE with all its ouches and groans!

Today is a bit different in that I'm really hoping to get to the allotment.  It is allowed, as long as people apply the safe distance rule which I have every intention of following.  It's just to cover over the dug over part, plant the broad beans (better late than never) and pick some rhubarb.

Something energetic:
Joe Wicks, Lindsey's exercises and some allotment work

Something for the house/garden:
I count the allotment in this so there's that plus general housework.  If it stays dry, I must remember to water.  I was surprised at how dry the strawberry bed was yesterday.

Something social:
Maybe a video chat with Beth and Alex.

Something entertaining/creative:
Well - I found some fabric in the cupboard that might be long enough and wide enough to try a skirt cut on the bias.  There's difficulties in this in that because it's cut on the cross, seams have a tendency to stretch and bulge, so I will have to go carefully.  It will be a learning experience, for sure.  It will probably get cut out and stay stitched today.
I'll see what's on the telly before I decide on the evening's entertainment!

And - as always - a bit of algebra (which I'm still enjoying).

While I was out just now taking the photo of the strawberries, I spotted the view over the fence with the rising sun just catching the farm house - which, by the way, if further away than it looks as I used the telephoto.  It was almost glowing. 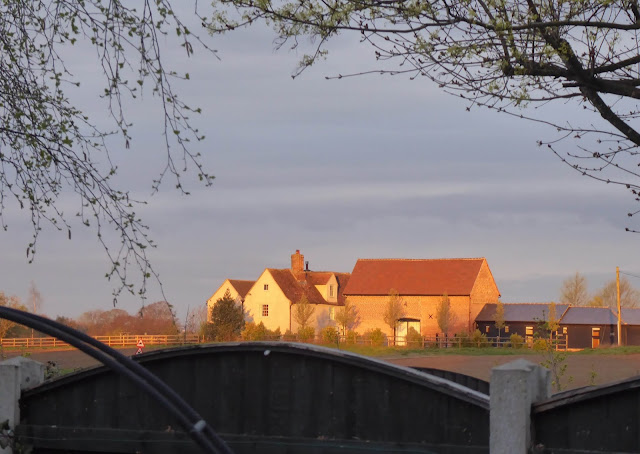