Good morning and a Happy Wednesday to us all.  The sun is shining, the French windows are wide open and, despite the fact that today is going to be a bit manic, life feels great!

I had a lovely day yesterday.  With a friend, I went on a coach trip to London, to Kensington Park and Palace.  The main aim was to see the exhibition of Diana's clothes and the memorial garden but there was also the opportunity to wander around the gardens and into Hyde Park, if we wanted to.

We left here at eight o'clock and it was a long haul into London.  Between visits, one forgets just how shocking the traffic can be - well, I do, anyway.  It was jolly satisfying to let the coach driver take the strain!

Neither of us had had much breakfast beforehand (mutual concerns about dodgy travel-tums which were unfounded but even so . . .) so we decided to pootle off and grab an early lunch somewhere first.  Problem was, most places didn't start serving until twelve so we had a coffee first (we were also in need of caffeine because of concerns about semi-elderly bladders!) and then found a Prezzo that started meals at 11:45.

And what a delicious meal it was.  We both chose an 'Italian sandwich' with chicken, prosciutto, salad and garlic mayo and we could chose between a side of salad or one of fries.  We had one of each and shared.  We also went bad and had a small carafe of dry white and it was all absolutely delicious eaten by the open window with London passing by.  Also, remarkably good value, a lot less that we had thought we might have to pay.
https://www.prezzorestaurants.co.uk/autumn-menu/PiadinaLunch/?id=3218&menu=LunchMenu

Then we sauntered back to the park and to the Palace, showed our tickets and got ushered straight in (nice!).  Everyone was so polite and attentive, even the ladies who searched our bags: in fact, the only criticism we had was that, despite air conditioning units, it was flippin' hot inside.

Diana's dresses were wonderful.  You saw her wearing them in photos all over the media so they were almost as familiar as items in your own wardrobe but seeing them in the flesh was something else.  The skill and craftsmanship that must have gone into their making, not to mention the time and stitching and fabric!  That high collared pearl dress also had little sequins stitched between the pearls and other dresses had the most amazing embroidery . . .
If you get the chance and are interested in that sort of thing, it's well worth a visit!

Then we meandered around the Diana garden and I took a few photos.  It's a very pretty, mostly white with touches of pink creation and very peaceful.  You can't go into the centre of the garden but there's a tree arched walkway all the way around with views into the centre and lots of sitting places.  Despite the many people, it was peaceful and lovely. 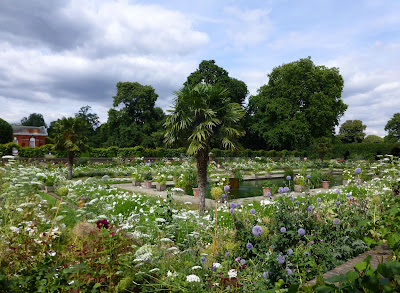 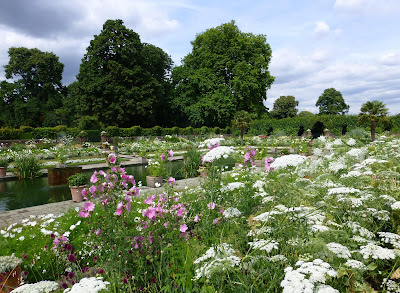 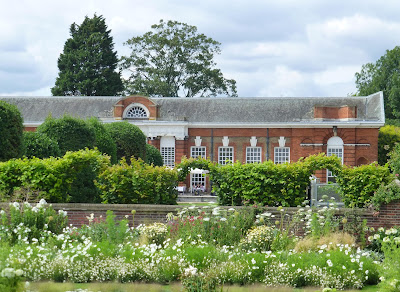 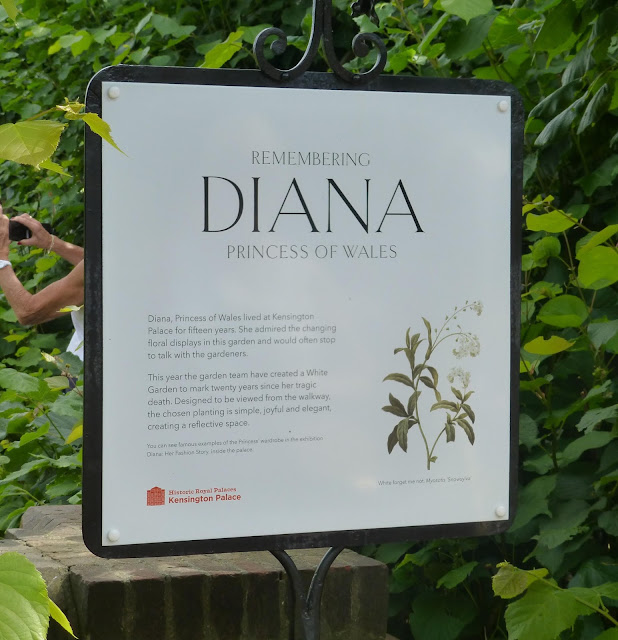 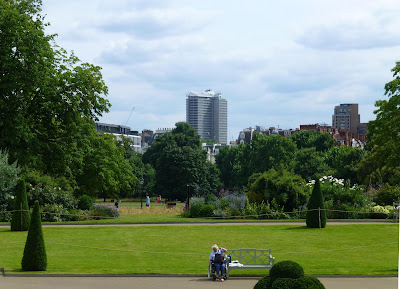 After a sit and a chat it was time to find the coach and come home.  We were going to go to the Flyer for a meal together but we both still felt full from our lunch so J drove home and I had some marmite on toast which was much better!

So that was yesterday.  Today the decorating starts so I have no idea what I'm doing until tuition when I have also been invited to stay and share a meal so that will be splendid!

It looks as if it is going to be another warm day and I must go out and water my poor plants as I have just remembered that I forgot yesterday evening.  They will be so thirsty!  Better do it straight away!